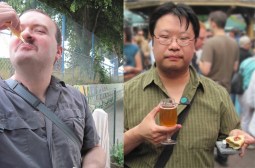 E: At the rate I was flying on a Sunday, the early evening couldn’t come any sooner. Expectations were very high between James and I for Fernwood Bites, and I must say, we weren’t disappointed. It helped us identify what the best of Fernwood is all about: locally grown products and innovation.

Aubergine Speciality Foods, a quaint grocery store, was our first stop and we were greeted with rustic tomatoes and Cherry Coke from Great Britain!

J: I was keeping my eyes on the groceries from the UK, the locally grown produce and those South African teas. But let’s not forget the baked goods and fair trade coffee. Mmmm, cookies with macadamia nuts.

I walked away with something for almost everyone in my family. My dad loved that Heirloom tomato.

While Ed rushed off after forgetting his wallet and apparently his pants too (he was flashing knees in khaki shorts), I took my mark near the Fernwood Bites starting line.

E: Ah, but without ID, anyone could’ve snuck in, which James apparently tried to do. The smell of open fire bbq’s permeated the early evening and as tantalizing as that was, that little escape was needed.

When I did return, it was the open sea that I sought first. I wasn’t going to find it within the confined space of the square, but I managed to wade through the masses to find Sea Cider Farm. I had to see if they had any product to sell, and the person I talked to reminded me of Vincent Van Gogh, complete with a straw hat.

He offered me a sampling of two cider drinks. Although it was a tough choice, Rumrunner has the best memorable name. The cider was soft and subtle too. Not too dry, not too sweet—it was just right to whisper the gentle words: slow down.

J: Van Gogh would be appropriate because he did remind me of someone who stepped out of a painting. And speaking of the sea, thank you for reminding me about Stage’s Octopus kebob. I guess it was payback for all the Boylan root beer from Aubergine I drank.

E: That Octopus and chorizo combo certainly did hit the spot. The nice soft white meat was beautifully complimented with a touch of spiciness, and they went fast. I had to make sure I was in line two more times before it all disappeared. The fact that this cephalopod was harvested locally certainly made for a beautiful treat.

J: Yes, well at least I made it to the Stir It Up table. It was like walking into a beehive of activity. I think Stir was one of the more popular at Fernwood Bites this year.

With his Tamarin chutney and fruit potato filling. The tray took air and hands came in like British Spitfires on a clueless squadron of Messerschmidts. The one I did manage to ack ack was a delicious meeting of the ingrediants with just the right amount of spice to make it interesting.

A cesa bar from the Wildfire Bakery was a good desert to follow with.

E: Like the whale that I am, I eventally started to take it easy. I was meandering through the crowds looking for my next seafood treat. I don’t recall many fishy appetizers from last year, but in this event, there were two delightful offerings that I tracked down.

Hilary’s Artisan Cheeses offered a creamy appetizier that I savoured. They had a goat cream cheese combo that was topped with fine salmon. It almost made me want to sing soprano.

But, Charelli’s stole the show. I can eat their blue cheese until I’m literally feeling green. It was that soft, that creamy, that delightful… oh, I think I’ll go camp by their storefront now.

I feel that not all cheeses need to have a certain bite in order to be delightful. The sharpness typically associated with blue cheese had a soft edge over a hard one, and that’s why I loved it so much.

J: I found nothing about that particular blue cheese to keep me interested.

I’ll stick with other cheesemakers like Little Qualicum Cheeseworks where their blue gives my taste buds a nice kick. The stronger the cheese, the more I like it. But Charelli’s did have a nice gouda. I can nibble on it all day.

But if we are talking hors d’œuvre here, let’s discuss that wonderful chicken liver moose, bacon jam and arugula on a crusty bread. Bacon jam isn’t something new but Torin Eagen of Superior Cafe was the creator of something interesting. Well done Torin!

E: While we only scratched one side of the venue space, there were certainly others which tried to catch our attention. Continuing in my seafood quest there was also a shrimp quiche by Moon Under Water.

There wasn’t much to it that I found satifying. I think the problem was that, like the mushroom pot pie, both were on the dry side. I had to find the nearest table offering a rehydrating drink. I believe it was the Kulu table that had a taster’s sized cup of ‘real’ bubble tea. I really liked it, and was trying to explore the complexities of this combination. And when I looked up, James was flirting with the girl behind the table. Of course, he didn’t get her number.

J: The quiche from Moon Under Water was too strong and the shrimp flavour covered everything else.

Cafe Bliss’ Goji fudge had too much cocoa. But Fernwood Inn and Cornerstone Cafe came to my rescue. Fernwood’s roasted vegetable tacos were spicy yet refreshing. It’s a perfect quick bite if one is swamped at the office. Cornerstone’s oven roasted chicken and tomato panini is comfort food. One bite and my mood changed. Maybe it was what tasted like local ingrediants or maybe it was the great jazz performance (I was already down Route 66) that put me at peace. Time slowed down.

E: And I was beginning to crawl. The combination of several alcoholic drinks, including a requsitie visit to Victoria Spirits, was starting to hit. But I think it was several wines along with all the cheeses I had, that had my taste buds swimming, trying to decipher it all in such a short time.

I needed to take walk around the block and nearly half an hour later, James and I hit the Fernwood Inn so I could get another dose of coffee before heading home.

Sampler size doses just doesn’t do it for me, even with two different coffee vendors, Fernwood Coffee and Discovery Coffee, at this event trying to keep the masses sober. I went with Fernwood since this was that kind of neighborhood.

2 thoughts on “Fernwood Bites Back”