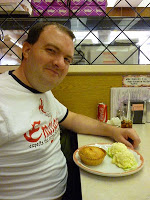 E: The Dutch Bakery is a good standby when James is late and needs a bite to eat. I was busy but by the time I finally met him an hour later, did I chew him out? Nope. A Flying Dutchman got in the way.

J: I was late with a good reason. Ed and I have a 2nd meeting place at Murchie’s where I knew he could be found in the company of freelance journalist Tim Colinson (he has many articles published in Monday Magazine).

With my mom in tow, I stopped by to see Ed and invite him to meet me at the Dutch Bakery after his meeting. My mom doesn’t get to visit many nice places so the Dutch Bakery’s diner seemed appropriate. Sushi Plus was my first choice but knowing Ed, he won’t enter the place let alone eat there.

Ed’s Flying Dutchman sandwich looked delicious but I settled for a turkey meat pie with a side of potato salad.

E: The liver and ham combination was really simple and satisfying, But I was disappointed that the bakery ran out of croissants. The fluffiness of that bread would have really made this sandwich soar.. 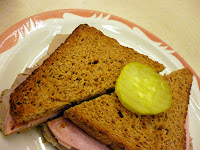 J: My turkey meat pie was just fine.It was like a shepherd’s but without all the extras. whipped potato and ground turkey were the two ingredients that made for a tasty lunch. The crust containing it all was light and flaky. The potato salad was strong, just like mother makes (she should know, she was seated across from me) but with a very pronounced mustard flavour.

E: Like the ghostly ship, the Dutch Bakery is a place that James and I can regularly haunt. The meals are simple, but next time I’m showing up early to get the best selection of their limited fluffy delights. James needs to keep a timepiece on him, otherwise it may well be off with his head next time.