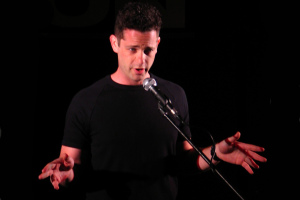 Stage Magician and Comedian Tim Motley has more than just one character hiding up his sleeve. He can simply be himself, or appear as a character from long ago. In the past, he’s played the role of Arizona Jones, a character that’s a cousin of the famous archaeologist, Indiana, but these days, he’s Dirk Darrow, a sleuth with an eye on enchanting audiences with his slight-of-hand and wit. He appeared two years ago at Victoria’s Fringe Festival back as a Not Completely Serious Supernatural Investigator in Dirk Darrow: NCSSI, and this year he returns with 2 Ruby Knockers, 1 Jaded Dick. If there’s a sexual joke in there, theatre-goers will have to attend the show to find out. At other Fringe shows, this show has been reported as sold out.

This talent has performed magic tricks since he was 11 and entertaining the masses since he was 14. During that time, he’s been to many places and one thing that Fringe affords him is to be able to take his act all around the world. He’s gained a following, and his act is a mix of comedy, magic tricks and mentalism.

The character took years to develop and it’s evolution was an organic process. The idea began when Motley thought he should retire a magic trick he’s been doing for eight years. The vintage props he used were dated, and he thought nobody understood the reference. But when he was in at a cabaret show in New York City that recreated all that was enjoyable from the 30’s, including a wonderful burlesque show that he had to follow-up on, he came up with the character on the fly to help frame the narrative for a magic trick he was doing. The people liked it. This short, eight-minute act, continued on for a while until Motley decided to make it a complete show of its own.

“I wasn’t that big fan of noir before,” admitted Motley, “but watching all the movies and reading all the books I could find really helped. The one author that really stood out for me was Dashiell Hammett. He wrote with this quick-paced action that I really liked.”

This writer created many greats that aficionados of hard-boiled detective literature will instantly recognize. Sam Spade of The Maltese Falcon fame is one of his best known. For Motley, he believes Hammett is the grand daddy of all noir and he likes his take with the genre. For the first show, this producer took a few ideas from Hammett’s works and developed a theme and narrative structure from it.

“The version I did was called Dirk Darrow, P.I. at the Melbourne International Comedy Festival 2010. I had a ‘ghost’ in the production but it just didn’t work. They [the audiences] just weren’t buying it because my whole thing was tongue in cheek,” said Motley.

“Afterwards, I rewrote the content before taking it to Adelaide Fringe, the second largest festival in the world (which takes place in Australia), and then finally to the Canadian Fringe circuit. That was called Dirk Darrow: N.C.S.S.I.”

For this producer’s second show, Two Ruby Knockers, it’s directly modelled after a work of Hammett.

“I could just stand there on stage, read The Big Knockover and that would be the show,” thought Motley.

All this stage performer needed to do was to make the new magic tricks he’s developed work with the narrative. Motley admits the product is much more cohesive. As for where Dirk Darrow can appear next, he’s hopeful that the detective can continue in other mediums. There’s so much potential to see this character evolve past the Fringe. To truly appreciate him can mean audio drama recordings.

“Well I’ve had two radio chat shows of my own, as it happens, in the past just as myself,” revealed Motley. “I haven’t really thought of doing Dirk Darrow on the radio, I’ve done interviews as the character [in promotion for a local Fringe show].

There was a plan to make a Dirk Darrow TV show in Melbourne, Australia but the TV station had their broadcasting license cancelled. Despite this setback, Motley would still like to see a spoof detective TV show get made. As for comic books, that is an idea that has not been considered even though this producer is a huge comic book nerd. When the Dirk Darrow character rarely channels the likes of Columbo and Constantine moreso than Dylan Dog, to see how the magic-welding sleuth can develop in the printed pulp medium can be worth following. With top favourites like The Preacher by Garth Ennis and Y: The Last Man by Brian K. Vaughan, they may not figure directly to any new characters Motley may invent next. For superhero comics, he loved Joss Whedon’s run on the X-Men comics, Frank Miller with Batman and Ennis with the Punisher. For this ‘Daredevil’ of the Fringe world, he does want to eventually develop a superhero character to play on stage. To make it work will be difficult. He’s also not above revisiting past characters when the offer is there.

“But I don’t want to stereotype myself in any circuit either. There’s branding and being limited by stereotype. I think I like to do a different show next and come back to Dirk Darrow maybe a year after that,” said Motley.

2 thoughts on “[Victoria Fringe Festival ’15] A Look at the Many Faces of Tim Motley, Dirk Darrow & Beyond”