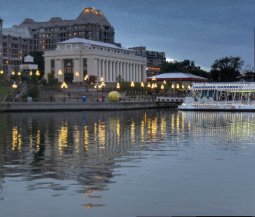 Supernatural tales permeate throughout most of Victoria, British Columbia and there’s a handful of ghosts who love visiting eateries. With Halloween near, interest in this world is at its peak, and some may want to dine at an allegedly haunted establishment.

As a paranormal enthusiast who is trying to keep up to date with new tales, I present a catalogue of nearly every haunted eatery in this city. Some I’ve been to dine at and others are still on my bucket list.

In a few stories I’ve personally been told, Monty’s Showroom Pub (closed) was also haunted and I was invited to investigate this place with me and my PARAVI friends. We did not find anything conclusive, but to be in this venue after hours and quiet certainly had a different ambience.

The area around Bastion Square has a fair number of haunts within a square block. With a few friends who once operated a restaurant or late-night pub in this area, they have related to me a few experiences: a past owner/operator of Baja Surf Grill (no longer in operation) mentioned finding wall hangings strewn on the floor and while I think he’s pulling my leg, the area is old enough to have some secrets. But in all the tales he tells me, I figure the ghosts of downtown Victoria love him. He used to run a downstairs pub, close to The Churchill, many years ago and recalls seeing something on the stairs!

Nearby, Roger’s Chocolates is perhaps the best known; located on 913 Government Street, the founders of this sweet shop have never left. If you look up the building, perhaps they may be peering down upon the streets. Charles and Leah may well wave hi.

Located within the block are Camille’s (45 Bastion Square), the Bard & Banker (1022 Government St) and Garrick’s Head Pub (1140 Government Street). Around the downtown core, there’s also The Keg (500 Fort Street), Nautical Nellie’s (1001 Wharf Street) and The Guild (1250 Wharf). If your server is comfortable enough to talk about their encounters, they may recount tales of their after-hour experiences. The big reason why these venues are haunted is because they are operating out of historic buildings; whatever happened there in the past — those murders and suicides — still lingers now, way before any eatery had set up shop.

When I get a sense that there may be a presence near, I will ask. One story I loved hearing was when I dined at the Princess Mary Restaurant (formerly located on Head Street). The chef told me about the kitchen experiencing poltergeist activity. Oven doors opened and closed on its own — nothing new in my book — but in what intrigued me was the story about why the former captain’s wife (she hanged herself) decided to stay around. The chandelier that’s been said to move on its own may well be a reminder to those in the know that she is still here. When the operation ceased and the parts of the boat dismantled and kitchen equipment sold, I heard her presence followed.

Other poltergeist-like tales include staff noting the sounds of furniture moving on its own at Pounders Restaurant (535 Yates St). Whether they continue, perhaps an investigation is needed during this operation’s off hours. With PARAVI on an extended break and Beyond Belief Paranormal Events being the only game in town (other local organisations exist but I find they are not as well publicised), this establishment sounds like a place to check out! There’s nothing wrong with any group offering public events but I’d rather be investigating as a journalist and look at the results to help explain to the public why this hobby is fascinating. Folks wanting entertainment are better off going to the fun events happening around town; they’ll get more value for their dollar that way.

I want to understand what causes the reactions from both the living and dead. Just like in Star Trek IV: The Voyage Home, to know that Spock comes from two worlds, the computer is apt to ask, “how do you feel?” I’m not expecting perfect answers, and if I can somehow help, I will. I am not wanting to get that proof to show to the world the afterlife exists. My interest is a personal one, and if a reputation develops, I’ll take it as it comes. Respect comes from those who have a true interest in a hobby that’s not motivated by making money out of it.

I do not have the sixth sense to feel what’s invisibly there. If I did, maybe I can discover the secrets in the building that houses Murchie’s Tea & Coffee (1110 Government St). The energy at this building is more vibrant than ethereal. There are rumours of a phantom riding the elevator at all hours of the day and night here, where this operation resides, but nothing has been witnessed by me.

On the other hand, in the area of James Bay, the Bent Mast (512 Simcoe St) has its oddball energy that permeates within the old house turned pub. There are at least four permanent residents here. Late into the night, they might make their presence known. Although an encounter with one of the most famous residents of this area is unlikely, to know artist Emily Carr is near may get some folks curious. Just where she passed away became the men’s washroom in the James Bay Inn Pub!

On the other side of the downtown area, Point Ellice House (2616 Pleasant St) has converted a corner of this historic site into a restaurant. The house itself has ghosts (according to my fellow investigators who can hear words from the other side, they are racist and have thrown insults at me) and they may sometimes drift by to delight in a tea or two themselves. Small meals are offered here instead of full meals. Across the Bay Street Bridge and down Catherine Street is Spinnaker’s Pub. Years ago, an apparition of an old lady was seen but since then, she has not reappeared. I have been there on more than one occasion this year (mostly exploring the outside at night for Pokémon, the mobile AR game) and have not witnessed anything. 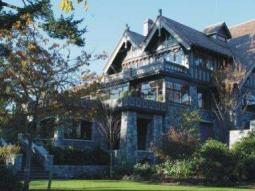 But when venturing into deeper Esquimalt, I have wondered where the ghosts from Tudor House Neighbourhood Pub disappeared to. This bar burned down years ago and no word has surfaced about where those resident ghosts went. Although displaced, they may have dispersed and are laying dormant. I doubt they took up residence at Ye Olde England Inn (429 Lampson St), but you never know … I’ve visited the Fireside Grill, and there are stories. It’s known to be haunted; a spirit is said to wander the grounds.

When leaving the city, I was not surprised that along the way to Langford / The Western Communities, Four Mile House (199 Island Hwy) is haunted. Margaret is a friendly ghost. Another permanent resident is Jake. Also sensed are accident victims from long ago —perhaps coming here seeking help from those who can sense them. Within Langford is Ma Miller’s Pub; (2903 Sooke Lake). This operation embraces the All Hallow’s Eve tradition with festive events and it’s said the spirit of the original operator (Mary) still frequents this place!

Six Mile Pub (494 Old Island Hwy) is said to have a few occupants too, but no concrete evidence has been found to date save for tutelary notes. I’ve visited both operations, and the food is quite good. If I sit for a spell and meditate, maybe I can get a feel for those residents who visited here long ago.

As much as I like to resume this hobby in a proper capacity, there’s one word to the wise I adhere to: never investigate alone. There are those who do, but any evidence they find can be scrutinised as products of an imagination when isolated. I want to use deductive reasoning to figure out the who, what, when, where and whys of a haunting. Yes, I’m available for any local group looking to add to their membership.

One thought on “Eerie Ed’s Guide to Haunted Victoria, BC Eateries”