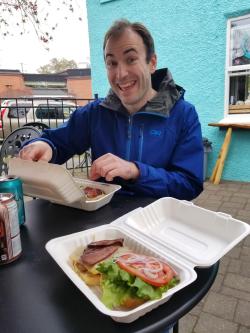 DK: Ed has been waiting for me to start this review for almost as long as Fairfield Fish and Chips was in operation. He will have many more opportunities to nibble away at my procrastination. The days of fish and chips and roses, however, are over.

Hive Eatery took over Fairfield F&C’s old digs back in August. The chip shop was once heralded as slanging the best burger in town. So yah, they left some shoes and nostalgic neighbourhood cranks are gonna be looking to the Hive to extend their toes right to the seams of said shoes.

Ed and I both chewed on Hive’s bison burger. A gamble for me as BBQ sauce, a condiment I don’t throw my hands in the air for, is a feature element of this offering.

ES: While I will mourn for the loss of the former operation’s succulent fish, the bison makes up for the difference. They source locally and I’d have to say it tastes more like a designer burger than a greasy joe’s. Don and I have debated which style is best in the past. The bun was certainly a step above the norm and the verdict–it’s tough to beat the grind when I was introduced to Albertan bred grass fed Bison. I think they wore a suit and tie before being led to the slaughterhouse.

DK: They are certainly more designer than greasy joe, but I was pleasantly surprised at how juicy this was for a bison burger. Some nice drippings for what is a leaner meat than beef. Fat added via custom grind perhaps? Rather good and somewhat reminiscent of a great, dearly departed burger truck that used to sit across the street from London Drugs on Yates (anyone remembers the name?) 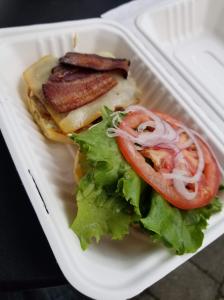 ES: On our next burger outing, we’ll have to hit Burger Crush, if my craving doesn’t beat our next plan out to the punch. They are newer, and I chanced upon them while exploring Cook Street before hitting Logan’s Pub for a show.

I can certainly say Hive’s idea of poutine had plenty to squeak about. It’s tough to go wrong with tons of gravy over fries. Their particular blend, a rosemary-chicken flavour is nothing to cluck about. I’m certainly sold! It’s for that reason I’ll have to return sooner than later to try their cornflake chicken burger.

Mind you, I’m torn. I prefer more crunch with the fries than utterly softened. For a place that is doing fancy-schmancy stuff, you’d think they can kick the fries up five notches than one.

DK: Wait, clucking is a bad thing?! Well, I cluck my satisfaction! Also, I scratch at the ground in approval and do other chicken things. I’m with you on the fries Ed. I prefer a thicker cut and crunchier fry for poutine. Speaking of Logan’s . . . they had a great burger about a decade ago. Maybe time to check back in on them.