Darrell Varga is a professor by day and baker at other times. His passion for the former began when he took a class in film history, and it opened his mind to the possibilities of the moving image. Many years later, his interest became his occupation, including penning many books and having a tenure at NSCAD University (Nova Scotia College of Art and Design) where he teaches cinema history and documentary film production.

When he’s not in the office, he worked on Hunters and Gatherers, about the world of collectors (and not just geek stuff) in 1994. This work predates the television show Collector’s Call and many other similar documentaries. He followed up with another piece in 1996, Working Days, funded in part by TVOntario, is about the closure of a Toronto factory (the first to close) after the signing of Free Trade with the US in the 80s and the sense of loss the workers had and the community. Not as well known is a video essay, Fire, Ice and Sky (2013) which explored the ideas of time and landscape.

He made films that were intriguing and mattered. He sums it up by saying, “Because life is strange, wonderful and weirder than anything in fiction.”

“I am originally from Winnipeg and learned the craft of indie filmmaking at the Winnipeg Film Group and also worked for a couple of years in TV before moving to Toronto for grad school. At York University I earned an MFA in Film Production and a PhD in Social and Political Thought.” 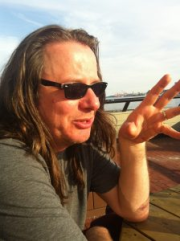 Plus, he’s a prolific writer. His latest is Shooting From the East: Filmmaking on the Canadian Atlantic (McGill-Queen’s University Press).

This documentary came from his passion for cooking since his teens. Baking was for many years a huge mystery for him, and he wanted to crack that code about a decade ago. It happened during a time of personal upheaval and making bread became a kind of therapy for him. “It was physically comforting and a slowing down of time. Then I became obsessed like all bread heads,” said Varga.

But there were other starting points. “It’s a witness to history,” said this director, noting its role in politics, “But for most people, it is in the background. Once I got started, I found an incredible amount of material—bread is everywhere in art, in literature, in politics because bread is life.”

“Once I filmed at Bread and Puppet Theater in Vermont (2013) I knew I was on the right track. This is the location that opens the film—giant puppet performances followed by the giving away of bread to the audience. The art nourishes the mind and the bread fills the belly. We need both. Then the job was to figure out the story I wanted to tell, rather than just replicate Bread and Puppet.” 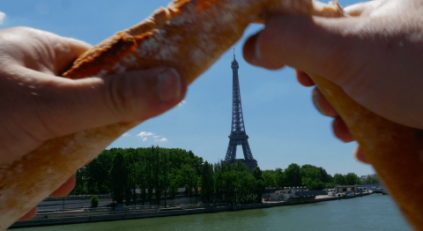 Were there any problems in finding folks to interview during the seven years of production?

There are always challenges, people who I want in the film but are not available for whatever reason, and those I worked hard to include but then had to cut from the final version for various reasons.

There are many, many great bakers, but not all of them have much to say, even though they may feel deeply about bread. I needed to find the baker storytellers and that was the challenge—and find people whose stories made sense in the context I have established.

I noticed there wasn’t a lot of exposition about bread’s influence in Arab or Oriental nations. Is there a reason for that?

I was limited by budget and resources (hardly any). 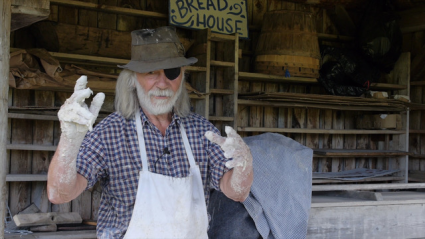 Did you have any favourite scenes? I imagine all the wonderful smells from the oven can distract.

You can never go hungry making this film. Lots of flour dust on the camera, lots of generous bakers. The favorite moments include Bread and Puppet Theater at the start and, near the end of filming when I interviewed Richard Cardillo, the storyteller who concludes the film (the man who lost his partner to HIV/Aids was in despair and then started baking and sharing his bread with the homeless in NYC. When I left his place I was ecstatic. I knew I had the ending (but I was still working on how to get there).

A true documentary moment was when, while shooting an interview in a Parisian park, a woman intrudes and begins interviewing us. She is proof of my claim that the documentary is always more crazed than anything that can be scripted.

I remember other references, like in nursery rhyme Pat-a-cake, pat-a-cake, baker’s man, and for Gen X’ers, some may recall the various segments about the loaf in Sesame Street or even the Muppets (Bread Monster). If given the budget to secure the rights, would you have looked bread’s role in learning/pop culture/media?

Again, there could be many bread films, perhaps one that is entirely of pop culture clips—that would be great! I do use some cartoons, and a lot of archival and public domain footage to hint this, and the quotations throughout also evoke some of that. It’s all in how the material is used, and my choices in relating the imagery to what my subjects have to say. 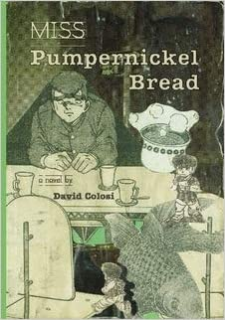 How significant is the reading of Miss Pumpernickel Bread to the themes explored in your documentary?

Significance of Miss Pumpernickel: bread and pee soup, what’s not to like? I wanted to push the idea of what seems “proper” and legitimate–to say whatever you may think a film like this is, or should be. I’m going to disrupt that.

Werner Herzog’s the cinema influence here—he pushes the boundaries as far as they go, and who would have thought a bread film could have a scene underwater?

If given the budget to realize your doc as a multi part series, would you do it?

With the series format, it becomes a product rather than a journey. There are some great exceptions, like the late Anthony Bourdain who could upset the bread cart of the TV format, but I am interested in cinema.

Is a home video release planned? If so, what kind of bonus material would you include?

We are in talks with some distributors and broadcasters. It’s a long process, even though the film has hit the current zeitgeist. It may take as much as a year for a video-on-demand release.

I am posting photos on my website and will likely dig up some extras as well, but video editing is so exhausting. It’s difficult to look back at footage that seemed essential only to be tossed into the trash bin of (film) history.

One thought on “The Man Behind Bread in the Bones, An Interview with Darrell Varga”