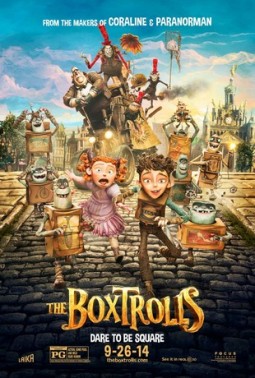 Hello again and welcome back to my weekly article. As we approach the month of October there can only be one thing on people’s minds. No, it’s not Halloween and it’s not pumpkin pie, it is the upcoming movies. As we leave the hum drum that can sometimes be the September movie month, we arrive at the doorstep of October where animation and horror films can be found inside just by turning the doorknob.

Although there are plenty of films for the family in the month ahead, you may be surprised to learn that many of them do not make my “Must See” list. Out of the ten films from the top ten list to be published in an article on Otaku no Culture, here is a sneak peek at five of those movies:

If you’re hungry for a good sci-fi and you were unlucky to have missed the very smart The Machine, then sink your teeth into this. Antonio Banderas plays an insurance agent for a robotics company sent to investigate a case of manipulating a robot. What he finds may cause humanity to question its future.

If you know of someone who can push you harder and take you to new heights, how much abuse would you be willing to take to achieve your goal. That is the question asked in this film that won the Top Audience and Grand Jury prizes at the 2014 Sundance Film Festival.

Michael Keaton is one of the most underrated actors in Hollywood. Even though he’s never won an Oscar, he’s larger than life but he still maintains that everyday joe attitude. Keaton makes bad movies bearable.

In this film that comes from out of left field Keaton plays a washed up actor who must overcome his ego and family problems as he tries to mount a broadway play.

I think reading war comics as kid has turned me into sucker for films like these. Pitt and his tank crew must go on a deadly mission in April, 1945 behind enemy lines during the European theater.

It may not be Sgt. Rock or The Unknown Soldier but toss in a tank and I’ll reminisce of the days when I read G.I. Combat. I wonder if Brad Pitt talks to the ghost of a Confederate general in this flick.

Ever in his quest to distance himself from the typecast of the Harry Potter films, Daniel Radcliffe gives us a unique movie (and a very good performance) from which to treat ourselves this Halloween. Radcliffe plays a young man who starts to grow horns after his girlfriend dies mysteriously.

A newly engaged couple have a breakdown in an isolated area and must pay a call to the bizarre residence of Dr. Frank-N-Furter.

Filmed over 12 years with the same cast, Richard Linklater’s Boyhood is a groundbreaking story of growing up as seen through the eyes of a child named Mason, who literally grows up on-screen before our eyes.

A young orphaned boy raised by underground cave-dwelling trash collectors tries to save his friends from an evil exterminator.

In the aftermath of a bloody confrontation between her band, the Innu tribe, and the Inuits, the “Men from the Land of Ice”, MAÏNA, daughter of Grand Chief Mishte-Napeu, finds herself on a mission that will change the course of her life. In order to fulfill a promise made to her friend Matsii as she lay on her deathbed, MAÏNA has to follow the trail of her enemies to retrieve Nipki, Matsii’s 11-year-old son who has been captured by the Inuits. She is taken captive herself by Natak, the Inuit clan’s leader, and forced to travel with them to the Land of Ice.