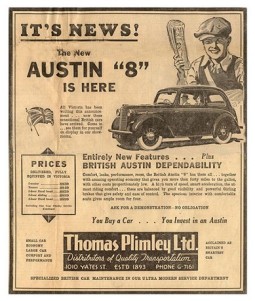 Plimley Motors Ltd. was a multi generational family business that was started in 1893 by pioneer auto dealer Thomas Plimley. The business was originally founded as a bicycle repair shop until Thomas sold the first car in Victoria in 1901, a tiller-steered Oldsmobile. Plimley would eventually sell the Swift, Coventry, Humber, Rover, two-cylinder Buick and the air-cooled Franklin. The dealership would later deal strictly with English automobiles. Of these their selection consisted of Jaguars and Austins but would later include MGs. Plimley also carried the Austin Healeys and then Rovers. And Plimley Motors didn’t just sell cars, they serviced them too.

The company of Plimley Motors Ltd. ceased in 1991.

Eldest son of Thomas and Rhoda Plimley, he was the second generation owner of Plimley Motors. In 1936 Horace kept the success of the original Plimley by founding Plimley Motors in Vancouver on Howe Street. The location became one of British Columbia’s largest dealerships. Another dealship Horace was responsible for was Plimley’s Chrysler Dodge at 2277 W. 4th Ave. In the 1950’s it would be known as Plimley Fourth Avenue.

Basil, son of Thomas Horace, became one of the few third generation executives of a BC business. Basil ran the family businesses from 1957 until 1986.

Basil was a genuine lover of music, art, horses, golf, antiques and all things to do with William Shakespeare.