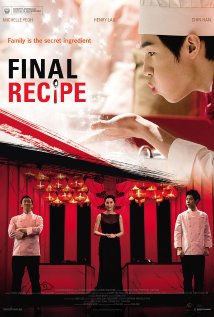 With a movie title like Final Recipe, I had to wonder if this foodie film is the be all and end all of films celebrating Asian-style culinary delights. I’m very grateful to the Victoria Film Festival for bringing in a variety of independent movies to my attention, and when every year manages to include some kind of food themed film, all my taste buds can do is salivate in anticipation!.

It’s tough to beat the first film (Chef of the South Polar) I ever saw. I became really hungry for Japanese food, and the lesson I learned that ramen cannot be ramen without kansui — a kind of mineral water containing elements of sodium carbonate along with a few other chemical compounds.

In Final Recipe, I learned that at least in China, there’s 1200 variations of what a noodle can become when cooked up. Flavours can be instilled, presentations can awe, but what about bringing pleasant memories from long ago? Especially that when one has become a conneiseur because of that first dish that mama made for you with love. Those kind of memories are not easy to forget.

This movie succeeds because it evokes those kinds of memories when the competition begins. I came home feeling hungry for a noodle-based dish and after satisfying my belly, I’m finally to ready to write!

This movie is wonderfully hilarious in its situational comedy and family drama about Mark’s (Henry Lau) attempt to save grandfather Hao’s restaurant, the Red Phoenix. When it’s close to foreclosure because nobody ever comes to it (grandpa doesn’t believe in catering to modern tastes), what Mark does is to use his skills learned from him and his highly trained senses to enter the Final Recipe tournament so the prize money can be used to pay off the many months of back rent.

He was lucky to sneak in the way he did when Demetri was a no-show. He pretended to be him, but the fortune cannot last forever. The things that Mark learns along the way about how a successful kitchen in a restaurant operates is not all that surprising. Teamwork is important and that makes for some amusing contrasts with the people — Sean (Aden Young), Kaori (Lika Minamoto) and Park (Bobby Lee) — Mark has to work with.

In some ways, this movie pays respect to the culinary lessons imparted by PIXAR’s Ratatouille. People should learn how to cook with the senses than by the book or at prestigious schools. Kaori has an ego because she has the best training out of the four, but eventually, this group have to square off against each other in the final round.

But life back home becomes a mess. Grandpa’s health is deteriorating and with the mystery about the parents never addressed, hints of what happened are slowly revealed. To say any more will spoil the rest of the film.

Henry Lau is wonderful as a newcomer to the acting world. He’s a Canadian who has become very popular in the Korean Pop Music scene. He’s better known as a member of Super Junior-M and to see him transition to acting is very much like that of how
Ross Lynch of R5 was chosen to be in Disney’s Austin & Ally. Even the music sounds similar. It’s composed to draw in young audiences than cater to the adults.

His youthful exuberance makes for interesting contrasts when he appears next to veterans like Michelle Yeoh (Crouching Tiger, Hidden Dragon) and Chin Han (Arrow). They play television producer Julia and chef extraordinaire David Chan. The film’s plot revolves around Julia’s attempt to give this iron chef a final hurrah, or passing of the torch since he was a celebrity in the Shanghai restaurant scene for the past 15 years.

The scene stealer is with Lori Tan Chinn who plays Mrs. Tan, presumably Mark’s grandma. This veteran of the theatre scene is adorably quirky and smartass in a stereotypical role of a doting elder. I was amazed at how her character tried to keep the Hao family together. True to how many an Asian family should be portrayed, these matriarchs command the highest respect.

For a film that’s both a visual and casting treat, I cannot help but be hungry for more films daring to make fun of the Iron Chef cooking competition formula. The story is nothing new. I’ve seen it before in the Hindi movie, Jadoo: Kings of Curry. Although there’s many a predictable plot point, I was still wiping my eyes at the end when all the story elements came together. Much like the food that was made, all the parts have to coalesce into a happy harmony of the flavours. And oh the tastes! If smell-o-rama was possible, I’d be wanting to taste everything presented on the screen!

The screenplay by George Huang and Gina Kim does a wonderful job to tantalize the taste buds with descriptions of exotic flavours and hints of what kind of meals are considered only palatable to kings and queens. At the same time, the action is smart to reveal that nothing should ever be restricted for the common man to try. Grandpa Hao taught Mark well with his old school methods, and although the elder would treat his customers harshly, the younger shows that nobody should be left behind, including the television crew forced to watch but not taste the dishes being served. If there’s leftover food, they should be treated to a great meal too!