J: It was a chance that Ed and I couldn’t miss. The city of Victoria — be it due to the improved air quality after the Vancouver Island fires or to an actual break in the weather — was cooler and bearable. Although I still prayed for rain, at least a plump (devilishly handsome) man like me could meet my best bud, pay him money owed before enjoying what this town had to offer.

After a stop at Curious Comics on Johnson Street, Ed felt hungry (I think receiving money makes it so). I must admit I felt peckish (giving money must have the same effect). I was determined to hit Sushi Plus but I had to compromise for Ed. I agreed on a Japanese restaurant I spotted in James Bay a week previous. It is run by Koreans but if you didn’t look at the menu one would hardly know. The restaurant itself is small and very intimate. I felt very much at home here.

There was a TV to watch from our table but it was more for the owner/employees than for me. While I have nothing against Korean programming (I find myself watching it from time to time) the channel I watch is TV Japan. I find Japanese restaurants here fall flat when it comes to the full experience. You could see a TV only to see something non-Japanese programming or hear music being played that isn’t of Japanese origin. If the full experience is what you wish for, you won’t really find it here on Vancouver Island. 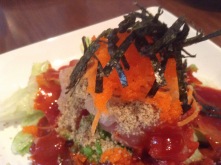 E: In what I glanced from their summer specialty menu, yes the weather is going to be a hot one. Yet, that didn’t stop me from wanting to try the spicy sashimi salad. Instead of the siricha sauce that I’m familiar with, whatever was put into this house made concoction nearly had me sizzling afterwards. I needed a hose of cold water to cool me down but the hot jasmine tea did the job. What was I thinking? Don’t get me wrong, I love the idea and Emeril Lagasse would have certainly said bam when kicking these greens up a notch!

J: I knew we were in for some good cuisine when the scent from the kushi yaki made me salivate. With each skewer containing prawns, scallops and brown mushrooms covered in a creamy ichiban sauce, the ingredients melted in my mouth. It’s a good thing we ordered two full meals. At $5.99, Ed and I could’vee put away twenty times the amount without any stomach satisfaction. 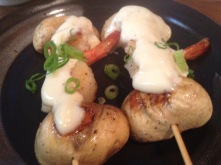 E: Well James can. I’ve become a touch more snobbish when edible fungi is concerned. I did enjoy the grilled taste very much and consumed the prawn tail and all. The morel of the story is that brown and white mushrooms just will not do for me. With all the wildfires that’s happening around BC still, I’m anxiously waiting for these fungis that’s going to sprout in the ashes afterwards. It’ll be a bumper crop once when the flames are out!

J: While Ed is without his morels (take it how you wish), I was with my Gyu Don ($8.29). They certainly upped their game with this dish. I’ve had beef dons before but nothing quite like this. There were so many veggies (onions, carrots, green onions) and a scrambled egg for protein. Korean dishes (at least the ones I’ve enjoyed) have involved eggs so one could almost call this a fusion dish. It was a mess but one big beautiful mess that only made me more hungry with each spoonful. The beef had that unique taste that only Alberta beef could provide. 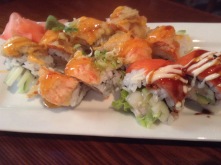 E: I stole a piece from James’ plate and agree. Although I would’ve like to know the farm it came from, there was certainly more of a softer if not massaged texture to go with my hot sauce painted sample. I needed to wash away a bit of that volcanic kick before I got to my two aptly named sushi rolls. When I’m on fire I had to stop, drop and roll. The heat was certainly milder in the sauces used on the tuna that was combined with deep-fried salmon bits which provided a satisfying crunch. Usually this type of combo doesn’t always work as normally, these two types of fish are served separately than together. The chilli salsa had a mild heat that didn’t erupt until later. At least with the Alaska roll, I could cool down. I barely tasted the scallops through the intense taste of the smoked salmon. This maki roll was the better of the two. By the time I was done, I was looking at my empty glasses of liquid.

I hoped for another refill of the tea, and it was then when the service dropped a notch. I really needed a drink to rinse my palette and our waitress did not return a third time to top up our drink cups.

J: That is a shame and they were doing so well with their service from the beginning. But could their food still please? I still had my veggie tempura remaining, it was the usual sweet potato, brown mushroom variety but the zucchini in it really sold me. The taste could be compared to what one would pick from their garden. The tempura was nice and flaky. The only downside of my entire meal was the sunomono salad, although it receives marks for presentation there are few marks to give out for its flavour. Letting the slice of lemon sit in the vinaigrette after stirring it all in the bowl improved the taste but there still wasn’t enough of that nice lemon flavour I enjoy so much. It could be that the slice of lemon was very bitter and it caused the liquid to have the same effect. Whatever it may be their sunomono wasn’t one to enjoy either as a desert or a starter.

Sushi Matsuri has been in business for roughly 4 years now and like any restaurant that isn’t of a four or five Michelin star rating complications will arise. While I appreciate the service and the complimentary green tea that Matsuri offers (which some establishments fail to do), a little tweaking is still in order. But I stress that these adjustments are minor. Overall Matsuri stands head and shoulders above many of the Japanese restaurants in town. I would add them to my own personal top five list of local Japanese establishments. Matsuri is proof that you can spend over a million dollars on a large restaurant and create something of indifference and yet open a small place in the seaside community of James Bay and create something wonderful.