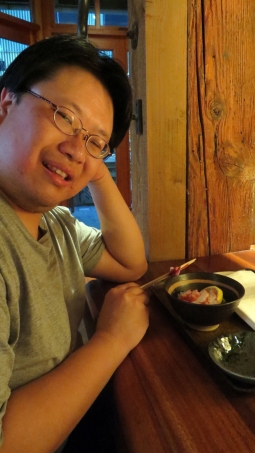 J: Ed’s a picky person when it comes to sushi and there aren’t many places I can lead him to when it involves food that he is so well versed in. But for The Sandbar, all I needed to mention was that the sushi chef was properly trained and from Japan. After that it didn’t matter that Omni channel did a documentary that involved The Sandbar and our sushi chef in question, Ed was already sold on the word “Japan.”

All I knew is that this was as close as I’ve ever had to sample the sushi one might find in Jiro Dreams of Sushi.

E: And with irony, that’s the only sushi chef James will ever know of. I had to wonder how he’d fare if we didn’t go to the Victoria Foodie Festival’s premiere show some years back. They’re now known as Feast, Food & Film, and I wonder if more Japanese chefs will be spotlighted?

Yes, Jiro sets the bar for sushi in Japan in recent times but there are others. Hidekazu Tojo was one of the first pioneers who came to Vancouver to set up shop, and he was featured on CityTV many years ago. Tojo’s Restaurant does some great stuff, and I had the opportunity to dine there once with my extended family.

I’ve been wanting to go back, but alas they are no longer based in downtown Vancouver. To find true sushi love is hard to discover in this city. I can firmly say that I can embrace Hoshi Sushi Japanese Restaurant with more than a hug with how carefully delectable the scallops are. To find the right texture along with the proper room temperature to serve them at really requires more than just the skill of a chef.

J: The Sandbar had a west coast look to it and upstairs the lights were dimmed. It was quite busy. I’m guessing it’s so you can have a better view of Vancouver at night from Granville Island.

But Ed and I made ourselves comfortable downstairs at the sushi bar. We had the place to ourselves for the most part. I had a hard time trying to sit on the high bar chairs. I couldn’t get close enough to the counter with my size and so I had to satisfy myself with leaning over. It was uncomfortable.

E: For some reason, I’m envisioning James as a seal attempting to launch himself onto land. The waitress was very pretty and before we were ready to order, we were given a warm towelette to clean our hands with. I’ll admit that this was a first for me to experience this kind of attention. When we were ready to order, I went for the obvious: the chef’s choice of the freshest fish of the season presented as nigiri samples. There were the basics; salmon, tuna, scallop, ahi, flounder, sweet shrimp and hamachi… um, James? Why was it on your dish?

J: Using the warm moist towel I felt like sumo’s former Yokozuna Asashōryū would’ve when preparing himself in the dohyō (ring). But I don’t think they would appreciate me sitting there at the bar in a miwashi. I may have the body size but my pecks wouldn’t impress anyone, especially our server.

But like a Yokozuna when the eel was placed into the dohyō (my plate) I was willing to push Ed out over it.

E: When it comes to eel, I can be slippery than thou. Fortunately, this place keeps good stock for most of the menu offerings. Well, except for geoduck. That’s okay. The super fresh uni made up for it. I could swear Tsutomu Hoshi-san went out to Steveston (or some local fisherman) to get it right out of the sea that day. It was that good. Even the maki rolls were delectable.

J: Sandbar does stock up in the Granville Island Public Market sometimes. Both have the same supplier but when it comes to an emergency, Sandbar trusts in Granville’s market to provide.

The large sunomono ($6.50) wasn’t what I was expecting. The octopus was very nice but the addition of lemon left the vinaigrette tasting bitter. There was none of the sweetness I enjoy with sunomono. And I have to keep coming back to using Sushi Plus in Victoria as a fine example.

E: I think James’ benchmark for using Sushi Plus for comparison is a bad one. I’ve tasted different before and seen a whole variety of rice noodles used. The type used here was very transparent, very different from what I’ve had before and I found it much more authentic. I did have to wonder where this was obtained.

J: The sushi here is definitely pricey but you get the quality. The scallops, for example, were amazing. They had a nice soft consistency I grew to love. Despite the bitter taste of the sunomono, The Sandbar is amazing. It is the best sushi I’ve ever had and now I can’t wait for a trip to Japan. There are many hurdles both financial and personal I will have to leap over but comes the day when I finally arrive, Sukiyabashi Jiro will be my reward.

One thought on “[Vancouver, BC] Tasting the Old World of Japan at The Sandbar”