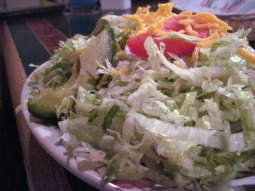 Ellensburg, Washington is a heaven for rock hounds, but for food, that depends on where you go and if you’re willing to hunt around for it.

Yvonne and I should’ve went further down the block than to hit the first restaurant we saw. I thought Mexican would be good on another go during the roadtrip, but not here. Temperatures were high and we both waited until the weather was cool enough to head out. I noticed El Caporal won many local awards which were proudly displayed by their front door, and we both agreed that none of them feel justified.

Maybe they do have a few delectable meals, but for what I tried, it lacked any spicy taste. Thai veggies can be hotter than hell if I really wanted have some.

Even their salsa had problems. It was watered down something thick and chunky. While Yvonne and I appreciated the kick the sauce had, I was still trying to get at the more meatier bits. Nachos do not make for good spoons.

And by the time my actual dinner, an avocado tostada ($8.25) arrived, I found that there was too much lettuce—what, am I supposed to be a rabbit?

I also wondered about the four meager slices of avocado that were on my plate; more would’ve been appreciated. While it had everything the menu suggested, this didn’t taste like a Mexican meal. The only cheese sprinkled on top tasted like American cheddar.

Kraft’s Tex Mex would’ve been a better choice over this salad. At least it’d give it some zest. Even after I unburied the meat hiding under all the lettuce, I just found there was no flavour here at all. I was expecting to do a cucaracha here and I hardly felt like dancing at all.

And after my experiences with Mexican in Seattle and Victoria, a good salsa is all it takes to make or break a place.