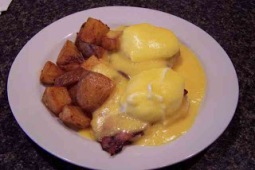 Fountain Diner
#102-2800 Bryn Maur Road
Langford, BC
(250) 590-6130
For me, breakfast at the Fountain Diner was an eating experience in excess. And I don’t mean too much food. After waiting for what seemed like ages for a decent breakfast café to finally open in Langford (I was too lazy to go to Jasmine’s), I was rather disappointed after sampling their wares. It appears good things don’t always come to those who wait.

I wasn’t at liberty to stroll through and observe their decor, but having booths among the tables and chairs was a bonus. My parents and I sought refuge by claiming a cozy corner. Until the cafe sorts out what food they want to serve in the future, a temporary menu was offered. Scanning their selection, I wondered to myself why a 3lb beef burger is even listed.

I decided to try their ‘Benny’ at an unusual price of $10.99. Their benedict is two portions on honey ham served with homemade hollandaise and hash browns on the side. And for good measure I ordered a chocolate milkshake ($3.99).

There was some kerfuffle with our orders. According to our server, they were out of beef dip, two types of bread and potatoes on a Monday. My order survived but with a small change. 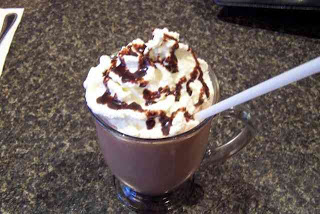 I tried to satisfy myself first with the chocolate milkshake but it turned my stomach. For the first time this is one milkshake I can’t finish—there was too much Hershey’s syrup. There would’ve been no difference if I ordered a bottle to suck back on. And Peter Billingsley flogged this stuff? I hoped my benedict would fare better

The eggs were fine but the hollandaise could’ve been thicker. The honey ham was overcooked and the English muffin was over buttered. My hash browns which were freshly made were too salty. Almost everything on the plate missed the mark. But was it just me? No, my father had similar troubles. He asked for sunny side up eggs but was given eggs cooked ‘over well’. His bacon, although cooked to perfection, was too fatty. And his toast was barely buttered.

I’m willing to give the Fountain Diner another chance. They’re new and every new business does need a few months to find its legs. And from what I hear, their lunch is fairly decent. Add to this the good service I received, I’ll definitely return in a few months time for a peek at their lunch menu.

Only this time I’ll not have such high expectations.