The Victoria Vintage Expo is a natural evolution of everything that the Victoria Vintage Fair offers. It’s far more festive because of the entertainment that’s offered throughout the day, and for people looking to see what’s trending, the two different fashion shows on both days is a plus. I’ve been to a few of the smaller shows just to check it out and the difference is very evident. I’d have to say the Vintage Expo is like a mini-convention because information panels were offered.

With more venue space, especially with this show being hosted at the Crystal Gardens, plenty of products can be displayed. It ran from September 27 to the 28th, and although I arrived on the second day hoping to find a leather vest, that really was not my goal. 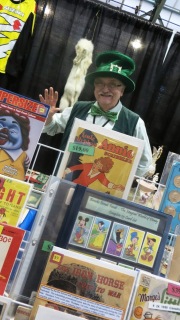 I just wanted to browse. I saw a plethora of items dating all the way back to at least the 40’s. There wasn’t much by the way of finding men’s wear (most of the clothing I found were for women) in my size and that explains why I’m not a regular at these events. Shaving accessories could be bought at The Copper Hat. Either I arrived too late or there are not many men wanting to appear like a rock n’ roller, greaser, or gangbuster at this show.Okay, my idea of vintage may seem jaded, but when I’ve been groomed by Happy Days and The Shadow, my outlook is different. There were certain aspects of pop culture that could be found, like seeing Al from Vancouver Island’s Most Amazing Collectable Show (V.I.M.A.C.S.) selling older comics and Disney memorabilia, that I appreciated, but as for more, it depends on what shoppers are after.
Vinyl records will always be the rage amongst audiophiles and there were more than a few vendors selling. Of the albums that interested me, none of them could pry my money away. I went to this show with a purpose in mind. After doing two walkabouts to see if I could spot an inexpensive leather vest that I can modify into a Eddie costume (from Rocky Horror Picture Show), I figured I was out of luck. So I went to check out what kind of sugary delights could be found. 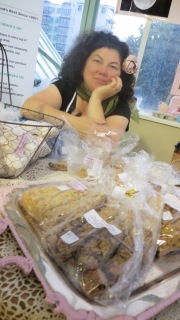 Biscotti di Notti & More offered two generous samples for me to try. I really wished I had a warm coffee with me to truly enjoy this biscuit, since that’s how they’re supposed to be consumed. The taste was quite nice, but what really sold me was their short bread. It was wonderfully soft and buttery. It was hardly crumbly and that was a surprise to me. The texture just melted in my mouth and soothed the old soul in me.

The sample had a whole nut in it which gave the product that added oomph that I don’t normally find in others. I can taste that careful love and attention that was put into this cookie, and that’s a plus in my book. It’ll be interesting to see how this operation will expand to meet demand. At least for people going to visit lovely Qualicum Beach, there is a place worth visiting.
And as for other delights, when I saw that Peeta’s Pizzelle is touted as “The World’s Oldest Cookie,” I had to wonder just how did this history come about? Apparently the pizelle was first made in the south-central area of Abruzzo in Italy during the 8th century. And its origin dates back to Ancient Roman times, where they made small pancakes, a crustulum, over an open fire.
According to the information found on pizzellecookies.com and justpizzelles.com, two small towns—Salle and Cocullo—claim to have originated the idea. It’s become a huge tradition over there because its used prominently in festivals. To have this food item brought over to America is no surprise, especially communities with large Italian populations.

This product is made much like how a waffle would and that makes for a huge difference! Modern cookie recipes say bake it in some type of oven, but the batter that forms the pizzelle is put into a type of waffle iron. I can imagine the variants that can be done with a warm pizzelle fresh out of the mold, like having it rolled and stuffed with some whip cream or even ice cream. I’m already drooling at the thought. But as for the cookie itself, how Peeta’s Pizzelle makes it is quite the light crispy delight. The maple syrup flavouring only complements the toppings that I’ve tried so far.
I really need to stock up on some ice cream and more fruits, since this product can easily be eaten like a dessert. Although I’m loathe to stick it into a microwave to hopefully soften it up, I will have to figure out a way to heat this product proper as I nibble my way through the bag I received. I lack a small toaster at home.

I’ll have to be careful in how many pizelles I can eat in one day though. One bag will be gone in a weekend! This company is working on distribution deals so it can be sold in select stores in Victoria. And more news can be found on their webpage as information comes.