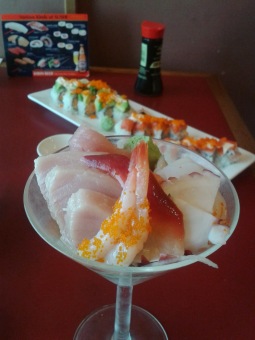 Yoshi Sushi is one of Victoria’s hidden secrets. I’ve been here a few times before and they have never disappointed. When I’m here for a lunch with a new friend, I had to find that prawn cocktail that I tried before and only saw that it had been replaced with a sashimi cocktail ($11). I was not disappointed, as the former meal had a sharp tanginess that could have been brought down a notch. With this new variant, the intensity is only as strong as the diner wants it when its dipped in a mix of soy sauce and wasabi. With various slices of tuna, salmon, sweet shrimp and scallop (lightly coated with roe) presented over a bed of radish noodles and seaweed salad, I thought the presentation was impeccable. The only thing missing is what I believe is a tomato that their online menu illustrates.

The fish was fresh and was better than what I had before at another diner I’ve been to the other day. If there was a detail that I’d have to pick apart, I’d have to say that nothing was used to prevent the flavours from one type of meat to tickle the other. This oversight might be because they ran out of those green mesh leaves, but that’s okay. It would’ve given the cocktail an extra design, like if I was was swimming through a clear sea of ocean blue as I eyed fish around me to snorkel over to. If I had a spear, I’d be tagging them for consumption later.

After trying the basics, I had to eye what Yoshi offered for fusion flavours. Their menu offered a few new tastes I’ve not seen before. The Saanich Roll was quite nice. I enjoyed the softness of the avocado and the soft meatiness of the scallops that were offered and I can tell when they’re not fresh from the sea. It was like I was making out with a mermaid. I’d say what I tasted was a good blend of the earth meets the sea, and I’m very picky in what I think makes for a good scallop. And when my meal arrived with plenty of salmon, it better be farm fresh or wild.

I admit that I will have to develop my palette to distinguish between the two, but as for which source Yoshi went for, I’m guessing they prefer the latter. I’m thinking they use sockeye here.

Overall, I’d return to Yoshi on a seasonal basis just to see what else they’ll change in the menu. Their variety is good, but not perfect. I like to find a Japanese restuarant that offers more seasonal tastes and a unique variety of seafood that is not often brought out from the ocean.