J: Oh what a difference a year makes when it comes to a production performed by the students of St. Michael’s Musical Theatre Intensive Program as part of the Victoria Fringe Theatre Festival. Compared to the clean version of Avenue Q from last year, the shackles were broken with Mel Brook’s Young Frankenstein. All the sexual innuendo was left in, just the way fans of Mel Brooks like it.

E: And one particular number got shuffled out of the narrative to become a finale for the night. I would’ve liked to see Dr. Frederick Frankenstein (Jasper Johnston) and the Monster (Ethan Ko) put on the Ritz and I fully understand to produce that number requires the students to either learn how to tap dance in a short amount of time or already have that skill. But in a seasonal program that is open to anyone that doesn’t ask for pre-requisite skills, that’s not possible.

By adjusting parts of the narrative, some audiences may well wonder at the plot holes being made. A leap of faith is required to explain how the monster was unveiled to the public to its escape and eventual recapture.

At least the sound of music tries to fill in the gaps. However, I was suspicious about the running gag associated with Frau Blücher (Hannah Tokarsky) in the movie. The sound of horses wasn’t played up as much and more instances would have been better.

J: Yes there were problems, missed cues, actors who couldn’t be heard and even the famous “revolving bookcase” scene fell flat. Some of this can be worked out while others (like the revolving bookcase scene) may stay. But there was enough fun moments and musical numbers to save the play. And if I learned anything tonight, I believe that Hannah will have a promising career in theatre should she take to that direction. My reaction to her first number, “He Vas My Boyfriend,” caused me to react in the same manner as when Simon Cowell heard Susan Boyle sing for the first time.

E: The nervousness that was found in the first performance of the four during Victoria Fringe Festival week will no doubt fade away as the cast gets comfortable in their roles.

I said to James that we should see it on Friday, but did he listen? We ended up going to the very first performance anyways due to time contraints. Since I’m more of a veteran to Jame’s virgin experience in covering musical theatre, I know full well the best show is usually the second or third show when everyone are confident in their parts.

Granted that the show is basically a graduation ceremony of what the students of the St. Michaels Summer Intensive program in Musical Theatre has learned, going to see these productions is like seeing an evolution of form. That is, to see a musical production in its rawest state. We do not need fancy sets and lavish lights to enjoy a musical. The shows are about the talented people who decide to put themselves in front of a stage to entertain people for, quite possibly, the first time and that’s to be commended.

And some of these students may well pursue a career in acting. I agree that Tokarsky has a promising career ahead of her should she decide to explore the performing arts more.

J: Ed probably thinks of me as the hard taskmaster, the man with the bamboo sword who uses it whenever a student makes a mistake. Although I can admire the image, I’m not as bad as he thinks. Still, I couldn’t help but compare the differences in production to Last Chance Productions’ version that we saw at the Waterfront Theatre in Vancouver. The play was still fresh in my mind. Out of both, “Roll In the Hay” stood out very well. You can see the performers let loose to enjoy themselves. The energy was high.

E: I could tell that Inga (Jordan Kerr), Igor (Corman Nugent) and Egor (Jorden Gilson) certainly had fun. For me, the standout number has to be with “He Vas My Boyfriend” by Tokarsky. “Deep Love” by Elizabeth (Andrea Ellsay) was respectable, since Ellsay found her muse in the later act. But for the meaning of this song, I thought a bit of the context was lost in lieu of providing a family safe version of the why her and the monster got shackled.

Even though this play purposely did a lot of gender switching for a lot of the roles, I did appreciate this play’s stand towards LGBT rights since there was a subtext that I graciously liked.

The only miss I thought was with “Please Send Me Someone.” I feel that song can be appreciated more with a male baritone style performance than a female soprano. The comedy during this scene is still gold, no matter who is playing whom.

J: The change to having one Igor character to having Egor and Igor fortunately worked in the production’s favour. I suspect splitting one character into two was a way for the director to give all of his students a chance to take part in the play. A gamble on his part that worked.

E: The subtle nuances are certainly welcomed. To see different takes of Mel Brooks’ classic certainly will keep me coming back to see it live than on a movie screen. Not many films can transition successfully into musical theatre, and for those that do are those that you can see time and time again. Now I just wonder if the school will take on Evil Dead?

Is Hamlet in store for this young performer’s future? 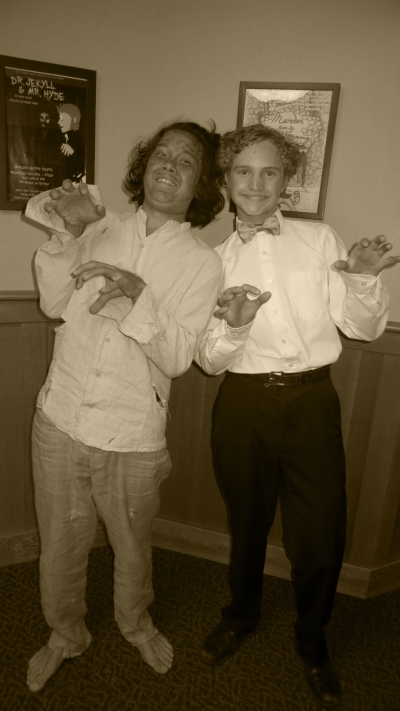 Doctor Frankenstein and Monster … or should that be vice versa?