Copeland Lecture Theatre
St. Michael’s University School
3400 Richmond Rd.
Saanich, BC
E: I find it hard to imagine that James Shaw is a Victoria Fringe Festival newbie. I’ve heard him talk about his days in theatre from his years long gone, but the intervening twenty years have not been kind. He’s been a busy beaver in the work scene and has forsaken the arts. Shame on him!

After a quick bite at McRae’s down the street, we were rushing to make it on time to this play. I was able to get him out of the house to get an education with a high school style rendition of Broadway’s Avenue Q. This coming-of-age parable is an interesting one. Because of this show’s Broadway success, it has been adapted by the creators so it can be performed by any theatre group in either North America or Europe.

This story is about how people of today have to become realists after they emerge out of college. That is, nothing gained is as gold as it seems, including an individual’s college education. Princeton (Joshua Litton) is a graduate with a Bachelor of Arts degree in English who thinks everything will be great once he moves to a big city. But as he progresses from Avenue A to Q, he finds that life on the highway is going to be very bumpy. The people he meets, from Kate Monster (Sarah Ellmann) to Christmas Eve (Cindy Kim), give him some advice and not even they have the answers.

At least the education in theatre does have a few social skills that students will especially develop by learning how to work in groups and overcome stage-fright. At St. Michael’s University, this summer intensive program has some great merits: Students get all the training that’s required so they can take it to the next level should they decide to pursue a career in the entertainment world.

They also perform in front of a crowd of about 120 people. The small stage many seem tiny, but it works. It gets audiences engaged into the product, and for James, I could tell he was enjoying himself very much.

J: Was that from the moment I realized the distance between the back of my seat to the control booth wall, as I banged my head in laughter? I’ve never been to a Fringe show because for 20 years I became a workaholic as much as I was a lover of the arts. 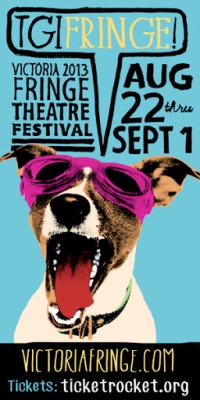 I was involved with multiple theatre companies, worked as part of the crew in a TV series, “Take Off,” and became a member of Cinevic. I owe it all to two people who nurtured that love of the arts. Through the local Arts scene, I have memories that I’ll never forget and made friends that I’ll long treasure. The two people who brought it all into my life were Mr. Peter Haylett and Peter Mannering. It’s appropriate because Peter Mannering nurtured St. Michael’s alumni Andrew Sabiston as much as he did me.

It’s a pity people these days will respond with a “who?” when I mention either Mannering or Sabiston. But yet our city falls over itself to honour Nelly Furtado and David Foster more for their success south of the border.

But my previous knowledge of St. Michael’s came from Paul Almond’s film Ups and Downs (AKA Prep School). Paul shot the feature on the grounds of the university and employed students not only as extras but in main roles as well. An acquaintance of mine, St. Michael’s teacher Colin Skinner, featured prominently in the movie. He would be forever remembered though for his group Capital Comedy Theatre. They put on such British comedy plays as “Run for Your Wife” and “No Sex Please, We’re British” at the local McPherson Playhouse.

E: And while James starts editorializing, I have to wonder how many former students he can name who has become well known in Los Angeles. Okay, I admit I had to google, but I thought that it was cool that we have an actress who attended this school who appeared in Star Trek: Deep Space Nine.

Now that was an awesome show. I don’t care what other people say, but they were in the frontier of space exploration when the station is parked right next to a wormhole. The plots could include exploration in the wilds or stay at home with backdoor political wrangling happening at every turn. But there was one time-travelling episode that was engaging which featured Leslie Hope. She played Kira Meru, the mother of Kira Nerys (one of the lead characters in the show).

In the pop culture world, Hope played many other characters. She’s appeared in Outer Limits and 24. 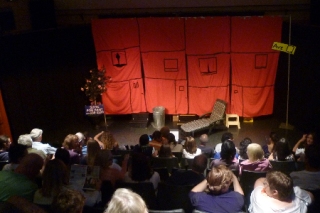 Now that I got that out of my system, I just have to wonder what emerging talent will come out of this year’s graduating alumni or from these stage productions?

The musical intensive program is not just for students from the school, which James did not mention. Victoria has talent too.

J: Yes, like Claremont’s Calum Worthy, Camosun’s Duncan Regehr and Oak Bay High’s Barry Flatman. But for people we may see with a bright future, I’ll start with Cindy Kim as Christmas Eve, the Asian stereotype with unemployed boyfriend Brian (Ryan Totz) . She appeared very comfortable on stage and her comic timing deserved the laughs it received at the performance. Also watch for Claire Williams to be a larger than life figure. As Gary Coleman, she weighted the cast down nicely by never fearing the limelight. With her large steps across the stage and her Brian Blessed vocal-in-training, she was noticed but in a good way.

It must be a in-joke with directors Donna Williams and Cam Culham. Claire was the polar opposite of Gary Coleman. She was white, female and certainly one of the tallest members of the cast. But that only added to the humour.

E: Actually, this type of cross-cast role may well date to the old days of theatre, when female roles were typically played by males for many reasons. Remember Sandy Duncan as Peter Pan? I didn’t have any issues with the casting or performance of Avenue Q, but I did find the stereotyping to be a bit grating. Even though I knew that the character of Eve was scripted that way, it wasn’t a character I immediately took to right away. You’d think that theatre would evolve with the times, but this one seems stuck in the 1940-1950’s with a few of its youthful optimistic ideologies.

This play was kinda like watching Happy Days or even The Honeymooners. The numbers were good, but they won’t make the charts in the sense that bigger productions have done, like with Andrew Lloyd Webber or Tim Rice’s works. I can easily hum along to “Any Dream Will Do” in an instant a lot more than with “Everyone’s a Little Bit Racist,” A fair number of this musical’s tracks are on the depressing side. The only really good song that I liked was “There is Life Outside Your Apartment.”

A few characters, like the Bad Idea Bears (nicely played by Chase Wood and Skyler Zhang in the evening performance) were keeners. I did appreciate the strong female roles in this tale though. They were very much in the zone.

I found the play to be funny in seeing Princeton was so indecisive and he took all the wrong advice to get to somewhere good. It reminded me of a certain individual I know of in real life.

J: I guess some people are bound to be offended. But sometimes people take the stereotyping and use it to humorous ends. My former Asian co-worker for example used to say “You white people all look alike to me.” It got him a lot of laughs. But for me I just stick to the “The Scots are so cheap” jokes. I stick with what I know.

But I’ll chime in with what Ed has said earlier, it’s a small theatre that makes it for a more intimate setting. I honestly don’t believe there was a bad seat in the house. It reminds me of the old former shop that Theatre Inconnu leased in Market Square. The production of Richard III was more powerful when viewed from the audience within that small space.

E: And that’s the beauty of what the Fringe Festival is all about. I’ve been attending this end-of-summer bash about five years now, and tend to favour going to the musicals and fantastical shows.

To be fair, I can’t pick apart a high school style production since it does a great service to the community. My problems lays with what the original play creators had conceived. The stripped down version is very politically correct for younger minds to digest, but I needed more.

Some products work and other’s need a willing suspension of disbelief. When this high school version of Avenue Q is basically a stripped down version of a raunchier product, perhaps I’ll just have to go to New York to get the joke.