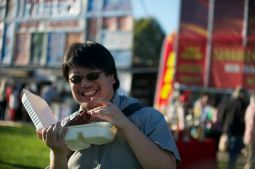 Toothpicks and dental floss are going to be needed after anyone who partakes in Esquimalt’s first annual Ribfest. It runs from Sept 13 to 16 with one hungry bloke really eating for two. James had no interest and I was not going to miss out in some potential meaty bone sucking goodness. His loss is my weight gain, but I think anyone wanting to try the best in what each of the five ribbers offer will suffer a financial setback as well.

A complete dinner will average $28 a shot and the people attending may not be hitting each tent in one day, or each venue during the whole weekend for that matter. It can be done, but like visiting the Hotel California, once here you may never leave.

At least the money is going to a good cause; the charities supported will get the lion’s share of the weekend’s proceeds. Esquimalt’s Christmas Parade, The Celebration of Lights and Santa’s Anonymous will benefit greatly from this show’s potential success.

With some great blues music to get folks in the mood, from bands like Lazy Mike and the Rockin’ Recliners and McKinley Wolf (providing some great covers to the Delta Blues), the party is going to last all weekend long. This festival does unfortunately have to compete with Rifflandia that’s happening the same weekend, but this other show has a completely different vibe and action. While Ribfest is touted as family friendly, Rifflandia is for the adult party crowd.

When considering my home is occupied with tons of toys, to hit up Ribfest was a no brainer. Until Blondie comes to Victoria instead of Courtney Love, my money is here.

As for the food, there are enough meats to satisfy the carnivore in me. I could partake in chicken, beef or pork. I stuck to beef since I was in that kind of a mood. Each venue — ribbers Boss Hog, Gator, Prairie Smoke, Smoke & Bones and Smokin’ Guns — had their special sauce that they would lovingly slather over an open barbecue grill. The scents were enticing and I got a good blast of it from the Hog when I wandered there first. The ‘Gator was weighing heavily in my mind too. I wasn’t sure why, and I will explain later.

Basic meals begins at $10 and tops out at $30 for a full meal (drink included) and what’s supplied is something that I could call lunch. Half a rack of rib from ‘Gator was $15. At that price, the dent made to my appetite is a small one. The portion sizes are good and with each venue offering three or four pieces, it was kind of worth the price. If they included five, then I’d be grinning.

I was happy to spot a hand-washing station at one end of the eating area but I thought more would have benefited. Can you imagine a ton of people going here, waiting in line just to clean their hands? I can understand waiting in line for food, but that shouldn’t happen for the only sanitary station I could see. I recommend to people bring moist wet wipes. Also, I appreciated seeing the volunteers going table to table selling drinks (some folks may forget to grab a bottle of water or pop from the concession area that was opposite of the food area) and cleaning tables afterwards.

As for who I thought was going to win or be the best, my money was on Boss Hog. Apparently, the ‘Gator won for best sauce (but I’ll have to confirm since I’m going by recall). Before the judging began, I made my choice and that says something about my foodie instincts. 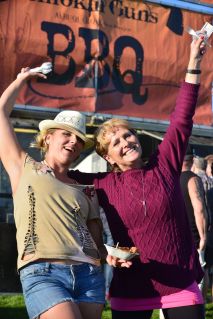 Despite a good show on the first day, I will have to note one criticism: all the good meals start at $15 or more. I blew $50 at this event, and that’s a good week’s worth of lunch for an average student.

The sampling seems limited to just the pulled pork (to which Smokin’ Guns offered an excellently made sweet variation that I tried just as I left). Although one rib is never enough, should this show manage to draw in cook-offs between more ribbers, I hope the management here will consider how Peninsula Ribfest organized theirs a few years ago: to sell tickets individually so people can order exactly how many ribs they want from the numerous cooks.

And all the cash being exchanged will be centralized than decentralized. I have to wonder just how much each venue have to take in to pay for their internal costs?

As for the quality of the meat, I could taste a few light differences. I detected how each ribber selects their product. Gator uses cuts with less fat while the Boss had more. I can’t speak for the others until I try them. For consistency, I noticed they all use the same brand of charcoal. For taste, the sauce is everything. I’d love to see other flavours beyond the traditional “BBQ” like blue cheese or honey maple bacon. This beggar is being choosy. In terms of the sauces I sampled here, yes the Boss does belong to the Hog.

I might return for Sunday just to try two more ribbers but that will depend on how much money I spend on Saturday’s official opening of the Victoria Public Market at the Hudson. I hope to make it there in time for the ribbon cutting, but after the amount of protein I had today, I might be better off hibernating.