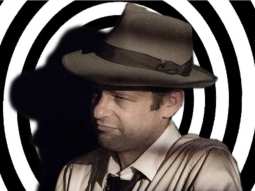 The mystery of how paranormal investigator Dirk Darrow landed into our century to solve crimes for us is explained 6 Quick Dick Tricks. After past shows like Not Completely Serious Supernatural Investigator and 2 Ruby Knockers, 1 Jaded Dick, he apparently is here to stay! Tim Motley is a master of his craft, and he’s created a very memorable character which has certainly made me want to come back for more! He’s a comedian, magician and actor who knows how to work a crowd and his abilities to probe into the mind of audiences, myself included, makes me wonder just how does he pull off his parlour tricks? By random choice — technically he asks if the subject knows him or not — people attending his shows might get selected to choose a card, any card, and he will tell you exactly what you got.

I’m sure there’s a way to mark a selected card after it’s being handed back, but he’s amped up how this trick works. The pack is contained by an elastic band and instead of one, five people were selected! He nailed every card selected, and while I kind of pulled a fast one on him — when he asked to toss the pack back at him — it was before he could count to three. He managed to roll with it, and Dick has his wry wit to snap back at me and I laughed.

I did it again on another trick, where you’re supposed to keep an item in the palm of your hand, where the entire audience was playing along but I won’t say what I stealthfully tried to do. His abilities to entertain have sharpened since I saw him last. I love his film noir references and his ability to poke fun at issues of today, including some jabs at local places, left me laughing hard. He cleverly teeter-totters between the plot and searching for the guilty party when he interacts with the audience. Ultimately the night is about seeing the magic! Most of what he does requires using a Time Turner first introduced in Harry Potter and the Prisoner of Azkaban to look into the future, but as for how he does it, I’m still scratching my head. Most illusions depend on deception to hide where objects are (including not palming a broken beer bottle hiding in one of five bags) but when it comes to getting information from random individuals, just how it’s done is still a mystery to me. At least I know the steward of the ship was not involved.

There’s no point in repeating what I’ve said before about this talent. Instead, I refer you to my past reviews of his shows and he’s one Fringe Performer always worth checking out, since he has new tricks up his sleeve every time he pops back in town. If not in this city, then certainly in the next town where a Fringe Festival is taking place:

[VICTORIA FRINGE FESTIVAL ’15]
A LOOK AT THE MANY FACES OF TIM MOTLEY, DIRK DARROW & BEYOND [INTERVIEW]