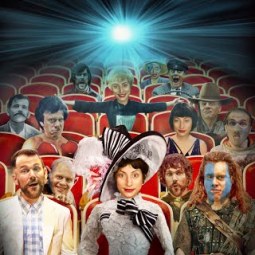 Movie-buffs will love the send-up, mash-up, mix-up and show down of Ribbit RePublic’s take of the Academy Awards Best Picture(s) from the past century. All the winners, including Birdman gets acknowledged. Many films are lampooned into a tightly packed fun-filled hour which includes nerdy moments which had me broadly grinning. I’m glad that the list of films also included those that did not quite made the cut (had this been an awards show), and yes, the Star Wars enthusiast in me was loving it!

Sadly, Star Trek did not get a nod (this coming week marks their 30th anniversary) but was that ever considered Oscar-winning material? According to Tara Travis, Jon Paterson and Kurt Fitzpatrick, apparently not. That’s okay. They at least acknowledged Lord of the Rings — Jon and Kurt worked together to play the polar composite sides of Gollum aka Sméagol from Peter Jackson’s cinematic version, and Great Scott! they even acknowledged Back to the Future too! That was not on the list. I did not expect them to follow the script exactly, and as for whether there was even one, I could not tell!

This comedic team’s routine is as smooth as silk, and perhaps the only time they broke from the script (if there was one) was mid-way, when they realized more nerdy movies really must be acknowledged. Just how they managed to insert a few noted television shows really requires me knowing Game of Thrones better. Yes, I know this series is hugely popular but I just do not have the encyclopedic knowledge about everything that’s transpired in this long fantasy opera. The same can be said for Walking Dead… Now give me Dark Shadows, that’s a series I can sink my teeth into.

For this Fringe show, it might convert my friend Jason Whyte into a live theatre buff. He loves his cinema but I rarely hear him talk about other entertainment mediums. He is the host of many advance movie screenings here in Victoria, BC and can be heard on CFAX 1070’s “Popcorn Picks” where both he and Pamela McCall are co-hosts of this segment. While my interest is broader — looking at the entertainment landscape on television, film and stage — I see everything as equals. To see it all combined in Big Picture and played out live (I always get giddy with musical numbers, to which there were three here!) is very satisfying. Now will there be an update to include this year?