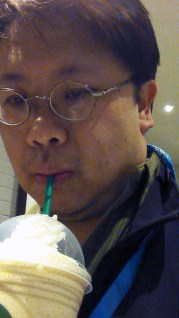 Out in a night in Seattle, sipping a Pokémon Frap’

When visiting the United States, folks still playing Pokémon GO might want to try the game-inspired Frappuccino Starbucks Coffee is offering for a limited time. Curious in what the fuss is about when I was down in Seattle for Emerald City Comicon last weekend, and there was a sign advertising it, I knew I had to try it out. Admittedly, the lighting does skew how it looks like — since all I had was my backup cell phone (it can take reasonably lit pictures well) — but in what the drink looked like went from blackberry to pineapple colour in a quick instant when I stepped outside. Not all cell phone cameras are created equally.

Perhaps the outlet I went to was out of all the necessary portion of ingredients. I tasted more pineapple chunks than berry and thought about how this pick-me-up should have been crafted instead of the recipe posted online.

I prefer a drink that helps conjure forth visions of little Pikachu in my head — the touch of red could have been enhanced if two cherries were added. They have to be plucked out of the cup like tapioca from a bubble tea to chew on. Since this rodent has two electrodes on his cheeks, the idea of saying I have him in my drink may sound morbid. Amongst gamers, grinding for candies is a term that will no doubt scare many if we learn a real ‘chu was ground down for us to consume, and the only part left are the nodes left floating in the drink.

Instead of blending all the ingredients together, perhaps the baristas should put in swirls of blackberry jelly instead. Not many people will ultimately care about how a drink looks, but if it is to sell interest in a game, something about the product has to be recreated.

This drink promotion is not a perfectly conceived idea. Sure, I can sip tea all day and spin the stops while here. Laptop and tablet users taking advantage of free wifi do that anyways. Convincing cell phone users is a different matter. Drinking coffee non-stop is not without certain dangers unless I want to end up like Fry in the Futurama episode, “Three Hundred Big Boys.”

I got a tonne of spins when GPS drift allowed me to get close (I stayed in a hotel that was right next to Starbucks) and plug a Lure module in. Sadly, nothing special ever came from it. A Hitmonchan, one of the toughest pocket monster to find, did appear but other than that nothing else was worth bragging about. I would have loved it if every 12th or 24th spin dropped an evolution item, but even then, there’s enough online talk to reveal those are extremely tough to get. A better idea, since I know the concept can be coded in: the more customers there are shopping and/or staying near that sponsored  Pokestop, and they are constantly spinning (this can be tracked), let the chances for a rare spawn increase.

Overall, I feel the product is a highly over-rated drink and I would have preferred to have the Beedrill (a vodka cocktail) from EXP Bar in Vancouver instead. The presentation is everything when it comes to cocktails. Now I wonder if a barista can paint a Pikachu in a latte?

One thought on “Starbucks Pokémon Frappuccino is Really Nothing Special”