The Victoria Fringe Theatre Festival is celebrating its 31st year, and it has no signs of slowing down. The diversity each year offers is unique. Some are better than others given the type of shows I like to see, and I am surprised at the number of speculative type shows have not dwindled. I begin my coverage with one show which is a parody of a staple tourist attraction that most locals are familiar with: 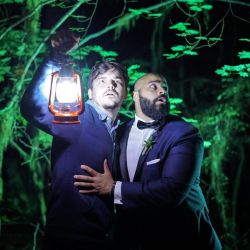 Tickets can be bought ahead of time at Ticket Rocket

Anyone who knows all the supernatural stories about Victoria, BC’s famous spooks will find “new” material in Abdul Aziz and Shawn O’Hara’s Fake Ghost Tours. This production has the most shows and is part of the Victoria Fringe Festival. It lampoons maybe one well-known haunt, and the rest is made up. The tales being spun are not designed to rattle any chains either. Some sentient spirits may be sensitive to being ridiculed, but that’s assuming they joined the group of about fifteen people as these guides take them on a walk towards the Inner Harbour.

Interestingly, some of these ghosts (when living) met their afterlife with harbour seals, and there’s no need for audiences to bark at them as everyone had a good laugh. I was interested in the family drama which crept into these guide’s dialogue, and those bits had me chuckling. This detail helped give the show a humanity which I liked over a total parody which certainly does not invade into John Adam’s Ghostly Walks territory. Perhaps these new places visited are indeed haunted and I will have to ask around for where fact exists over the fiction.

The show could use a bit of polishing to give those paranormal enthusiasts in the crowd material to enjoy. I am aware that everyone is not going to be like me, well versed in the ghostly history of the city and knowledgeable in nearly every paranormal television program. I was hoping for maybe a surprise from out of the corner, like in Ghostly Walks Extreme. But when considering the minimalist nature of Fringe shows, I did not expect more actors to be involved.

I hoped for some humour ala like how Most Haunted got mocked. While the tour did start in the paranormal heart of the city (Bastion Square), a few opportunities were certainly missed for those in the know. At least something was said about the grounds where the Empress Hotel lay. While I do not want to give away spoilers to partially scripted and semi-improvised show, I can certainly say it does have its moments to enjoy when audiences try to trip the duo up.

Rolling Down the Highway
with Jukebox Drive

If Jukebox Drive ever becomes a fully developed movie, I would have to say it can become the Breakfast Club of the road trip movie genre scene. Audiences get to look at the lives of three individuals coming together and recalling their lives from high school and onwards as they travel to a reunion. One gets picked up along the way, and in what unfurls makes up main act. Just who they are get challenged and the show itself reveals in bittersweet ways everything they faced in life. Part of it also reveals their insecurities. Due to the nature of improv, this tale is bound to change with the next performance.

Because music is key to this production, audiences are presented with a list of songs available to help define this performance. This show relies on them and they effectively set the mood for each scene. At least seven songs were played and the majority come from well-known bands from the 70’s to 90’s. While audiences get to define the start and end, everything else in the middle is quite the drama. The chemistry between performers Amy Culliford, Bill Nance, Jonah McKeen, Natasha Guerra are strong and while three become the centre of attention, the fourth comes in to fill in the blanks. I would have to see the show again to look at whether the roles are interchanged each night. With guest appearances in later shows scheduled throughout the week, I am very curious in how this program will develop.