I can’t say Futaba is a favourite restaurant of mine. They did a bit of change in the menu offerings over the years and the overall result is not convincing me by much. The quality is not quite there anymore as another mutual friend pointed out (see below image) and while the meal I had was certainly tastier on the night I visited here with James Shaw, the improvements were minuscule.

These days, this guy still has an opinion about the places we dine together and he always has to express (to me) what he thinks about the place. I tell him to speak to someone else or resume being a bloke. He stupidly looks at me and I always roll my eyes. I really have no clue why I still hang out with him since he can’t separate from when we are hanging out together as pals to when to shut up if we happen to hit an eatery. He knows I can use his words to put into the next food review. He can’t stop me. In that regard, he’s still continuing to be part of this food-zine (or should I say scene?)

I’m always in that mode to report on anything which I believe is worthy to mention. When considering Futaba is one of those long running operations in Victoria, BC, Mr. Shaw’s thoughts on some places not able to last and the reasoning in why he decided to depart holds no ground. He just wants to quit because it’s an easy way out for him to not commit to this or any other project we may have together anymore, his work and personal life notwithstanding. He can take to other forums, which is fine; to which he did post on Facebook his thoughts (see image on the right).

We got our appetizers within a couple of minutes. The takoyaki was crispy, soft and arrived as five pieces than the traditional six. They were wolfed down fast, before I realized I should take a picture. It was missing an essential ingredient to make them truly come alive: bonito flakes. James ordered a hot soba noodle with tempura. He detected a note of cinnamon with the batter and I was quick to type on my notepad on my cellphone this detail to reiterate here. 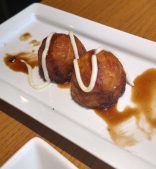 I agree there was something to the batter which is an improvement over other restaurants. Normally there’s nothing to this base product, but I devoured one of the shrimp tempura pieces from Jame’s plate like a hungry whale to krill. The meat was juicy, and maybe I should’ve ordered fast food instead.

My desire to eat raw fish took its time to arrive, and I was worried since James and I were going to a show at the Metro at 8 pm.

I will give this establishment’s sunomono salad props for decently thick and presumably house-made yam noodles. Each restaurant prepares this dish differently, and this place is one that gets it right: a slice of tomato, lemon and either crab, octopus or shrimp. I had octopus and it was the perfectly cooked. Not too tough and just soft enough to break apart with my teeth. Three slices are offered than the two I sometimes find, and maybe one day I will find an operation that decently does a mix of carrot, tomato (more than one slice), wakame (seaweed) along with a choice of one of the three main types of meat.

My main dish is an assorted selection of deluxe nigiri. The rice was a bit too soft as it crumbled. After the first one where I tried to use chopsticks, I just gave up and used my hands. They are finger food after all, and to keep it solid when dipping into soy sauce does require the hand to keep the contents stable than the opposite. The mackerel stood out the best and the scallop was not off. That was my worry, and reason why I stopped coming here years ago. The meat I had from this shellfish was not fresh.

I’m glad some quality control has crept in. While it’s not enough to convince me to resume coming here, there’s plenty of Japanese restaurants in the downtown core to choose from to hit. Omakase has stayed consistently good and their shellfish are a step better. Just don’t get James started about the ramen dishes here. He claims this operation uses the instant stuff. I don’t hit these places for the noodles as it’s always the fish for me.