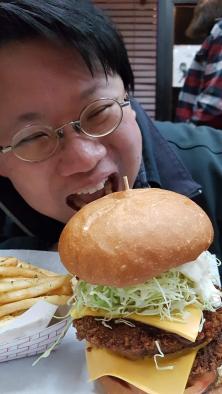 Hamburger patties can flame grilled, air-cooked or microwaved (for those in a rush). Frying it in a vat of oil is not altogether strange. That’s what make certain innovations interesting. Katsu Burger is a Seattle-based chain offering deep fried hamburgers. It’s supposed to be one of the latest things coming out of Japan, but one look online shows they are lightyears ahead with other innovations–like adding lotus root, fried noodles or using rice-based buns to a classic fast food dish.

The idea using fried bread is not above me. The thought of a protein patty sandwiched in between Indigenous style bannock is going to have me experimenting.

In what makes a Katsu katsu is with breading the meat before getting deep fried. With pork or chicken, the meat is pounded until it’s suitably flat. Though with ground meat, that’d be tough to do. Slabs of beef can be buffeted with honey to have a shine, and it’d certainly change the flavour profile.

A tougher decision was in deciding on what type of protein I want. The nuances of each aptly named burger are simple. I can go “Godzilla-sized,” attack the “Ninja,” take the escalator to “Tokyo Tower” (which I ordered) or climb “Mt. Fuji.” Respectively, it’s adding jalapeno peppers, including pork (which I don’t quite get the association), piling on extra patties of meat, or combining all three forms into one behemoth! Trying to wrap my mouth around the complete burger was a puzzle!

Not even Rubik can figure this huge behemoth out. It was almost cube shaped! The difference between grass fed beef over any other feeding process becomes quickly clear. It’s all about the texture. Toppings can confuse my tongue but I was too busy licking the greasy mess off my hand, as the flavours were good. This was a meal fit for a King Henry VIII!

The nori fries are quite the taste sensation! I wanted more, and the smoky flavour added to the love fest. It did not taste like the nori shavings you can pick up at a grocery store to sprinkle over rice. I tried this when I finally returned home to Victoria and it definitely did not taste the same. Plus, the different salty flavour was distinct.

Thankfully, Katsu has many locations around the Greater Seattle area. The closest to downtown is in Capital Hill. The walk back and forth from the closest hotel will maybe burn off an eighth of the calories gained.

When considering the differences between each location, I recommend takeout over dine-in. The Bellevue location I went to was tiny and the party I was with took up one-fifth the space! With a lot of major cities offering Uber Eats, I’m not at all surprised order through them makes life easy. Next time, I’ll most likely do that instead of walking the cold nights in this city to satisfy a burger craving.

On a side-note, the Ballard location offers sushi! As strange as it sounds for a burger joint to do this, I can see the idea working. A sushi cake is no different depending on how you layer the ingredients.

One thought on “[Seattle, WA] Katsu on a Feeling”