ES: Don’s the real Cinnaholic between us, and when a operation (technically, it’s a franchise) opened up in town, we pondered when to sample their wares. They boast freshly made cinnamon rolls which can be decked out anyway you want. I counted more than a dozen possibilities, and all I can say is wunderbar! Or should that be cinnabar? Okay, so the joke doesn’t work….

It’s often cold and wet in Victoria these days. To nibble on anything warm is required when out on the town late at night.

DK: Cinnamon buns are like cars, as soon as you drive them off the lot they start to lose value. A bun can be a 10/10 fresh out of the oven, but a 3/10 by midday. Also if you park a cinnamon bun in a bad neighbourhood you want to make sure not to leave any change lying around in the frosting.

I opted for a relatively simple bun with minimal add-ons: vanilla frosting, coconut, almond slivers and banana. I was lucky enough to get a fresh bun, but the Cinnaholic roll recipe probably includes enough preservatives and sugars to keep their buns moist for days (fun fact! When they pitched to Shark Tank they served the Sharks 3-day-old buns). 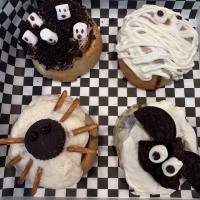 ES: I went all out with their seasonal treats, a roll made to look like a spider. It had pretzels for legs, marshmallows and a chocolate drop for eyes. It was delightful to tear it apart as a certain song was going through my head. These delights are better eaten warm than cold.

Like Don said, to get something ‘fresh’ is tough, and this place is as close as you can get from the oven to your mouth.

DK: Fresh it was (due to showing up late in the day when new buns had to be put in the oven), but gourmet? Hahaha, no. Not that there’s anything wrong with Oreos, but they don’t scream artisanal. Nor do generic bulk coconut shavings and slivered almonds.

Ironically, however, the industrial nature of Cinnaholic means more cinnamon flavour to their offerings than many non-franchise options (natural and artificial flavours are added to the dough). Bottom line? I may be tempted to taste some Cinnaholic specialties, like the Shaft-flavoured bun, in the future. But by and large I see this place primarily appealing to kids and vegans as opposed to those looking for cinnamon bun euphoria.

One thought on “When Cravings Are Tough to Satisfy at Cinnaholic”