Chimera Theatre‘s revisionist take on the Brothers Grimm fairytale The Robber Bridegroom is simply a masterpiece of German expressionism. Not only is this adaptation a love letter to this artistic movement but also a Shakespearean playwright was behind the reconstruction of the seminal tale. I have to tip my hat to Andrew G. Cooper for his use of turning the Sisters Grimm to a wicked new take of the Moirae as they are the narrators to an otherwise mimed show using various styles of puppetry to tell the story within the story. That is, to recount the seminal tale with sound, light and vision.

END_OF_DOCUMENT_TOKEN_TO_BE_REPLACED 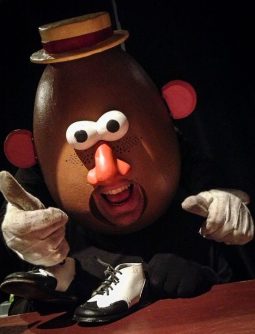 Quebec-based Belzébrute Theatre has a wonderful show that really must be taken on the road for more people to see. If there’s a lesson to be learned afterwards, many a person from the entertainment industry will get it. The creative minds behind this production know how rigorous life is when constantly travelling, hitting places like Radio City Music Hall, just to perform night after night. Between balancing the struggles for finding recognition to just finding that me time to relax, the team who wrote this show created an entertainingly comic product which brings nearly a century of the best performers from live entertainment into a fun-filled 90-minute production.

Mr P – The Story of the Real Mr Potato Head looks at the life and times of the world’s most famous nightshade. An usherette welcomes audiences as they come in and provides much of the live music. The silent film montage introducing the spud gives this show a surreal-like quality ala Toy Story (especially when Pogo the sausage dog is introduced), and when he can channel the best — ranging from Frank Sinatra to Elvis to Michael Jackson and Freddie Mercury — this potato can win many a crowd!