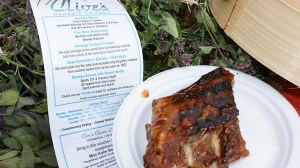 The skies over the Victoria Airport was high with a lot of friendly, competitive, fun at the Peninsula Ribfest. The third annual event came and went, and just like any other party, it was not without its hitches. I saw some of them when I went there, and had a few things to say.

But after having had a chance to talk to Rick Peters, one of the event organizers and owner of RC Grillhouse and Lounge, I learned that a lot of those hiccups aren’t really their fault.

“The same thing happened last year,” explains Rick. “We originally had 35 teams in, but lost a lot of them because unbeknownst to us, there was a chef’s conference up island this year. We lost a lot of the major hotels. They dropped out 3-4 days prior.”

Hiccups naturally occur and often, there’s hardly much of a choice in the matter. Ribfest was also competing against the Great Canadian Beer Festival on the same weekend too. So, where can a beer and rib lover go? Both events supported some kind of charity, and I’m noticing Rick is more open in talking about it in all the charities he supports.

This event exists to help Tour de Rock along—to raise awareness that money is needed for pediatric cancer research. And donations are always appreciated at any time of the year. No event is really needed to get people out to do a good deed, but when there’s food nearby, it’ll certainly get me there and pulling out my wallet.

“It’s just a fun event and we put it out there to get the masses in to eat some ribs and get some money for a good cause,” affirms Peters.

He wants to see this event grow and become bigger than beer-fest. And as I try to locate what the competition is offering, all I could find is a few words about support for CFAX’s Santas Anonymous.

“I have some contacts with professional BBQ people that travel all over North America, doing these events,” said Peters. “They requested that maybe we add another protein; so maybe if we add more to this event, like pork-butt, they can do what they do best.”

And that’ll draw in more people to come to this event, and have more competitions going. But ultimately, it’s all in friendly fun.