J: Penny Farthing is one those great British style pubs that seems to be the local social for all that is middle class. Nestled deep in the heart of the Oak Bay shopping district, which is in itself a slice of England, Oak Bay could be described as a place where old stiff upper lip society meets the new and trendy.With the Edwardian styled shop of the The Blethering Place co-existing near the more nouveau Bon Sushi, Oak Bay’s my slice of heaven.We were joined in company by people locally and from the far away land of Alberta. From Alberta were Bill Bracher, owner of Bullseye Bill’s Trading Post, Naomi DeBruyn, proprietor of Callaway Cafe and Robin Poirier, tech wizard of ReStart Computer among many other good friends.

Luckily for Ed and myself, appetizers were half price that night, which suits my Scottish purse just fine. The Crab and Lobster Dip was the first to land at our table.

E: And heading here was an escape out of a mundane night for me. After James called me up to say let’s go, I arrived with the opening theme song from ITC’s The Prisoner playing in my head

A few mutual friends were going to meet and we could nibble on some good food. Well, maybe—The Crab and Lobster Dip ($13.99) that I tried was okay. I found the cream cheese overpowered the more succulent tastes of these two crustaceans.

J: This isn’t the Fifty-Five Bar & Lounge of Camden Town, nor is it a quaint country pub. But I was hoping I could at least receive am English beer served the traditional British way. I ordered a Fuller’s London Pride ($8.25).

I should’ve read the menu closer because my pint of bitter was served cold. Oh how I yearn for beer served warm. And where will I find it? Perhaps a trip to Holmfirth’s White Horse Inn for a pint of their best? Who knows where my thirst may take me. 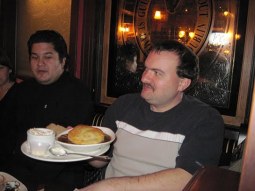 E: You could’ve asked the waiter to serve your drink warm, James. But then, you’d be waiting a while until it reached room temperature. I like the place.

Unlike James chilly meeting with a drink, the establishment was warm and inviting — unfortunately too dark for my cellphone camera. Maybe he just needs gloves and a toque.

J: A pair of gloves, a toque and a giant snow fort. I’m sure there was enough of us to re-enact “Les Guerre Tuques.”

But in all seriousness the beer was soon forgotten after a full pound of steamed mussels were placed on our table. I lifted the bowl and after nearly scalding my hand, I was ready to taste a dish fit for a king. Steamed with garlic and white wine, they were beautiful. But what of Ed?

A war was now declared and to the victor goes the spoils.

E: And that was me savouring the delicious white wine that was used to cook up these mussels. Along with the bacon and shallots, it did make for a tasty combination.But if I was a starfish, I’d be patrolling the shores for more to eat and grab every shellfish I could find. Lord knows I’d have enough tendrils for it.

The Steak and Guinness Pot Pie ($14.99) was confusing. The fun process of a pot pie is to work inwards by eating the crust. Then you use a buttered bread to soak up the gravy that generously leaks out. This was more of a pot pie for those who are already pissed as a newt.

The pastry shell was in the middle of a sea of thick gravy. All the fun and joy was removed. The crust tasted similar to Yorkshire pudding. The pearl onions had sadly drowned, never to be seen again. As for the for the taste of the gravy, take it away Ed.

E: It can put hairs on your chest, and make Mel Gibson scream Braveheart! The gravy was a delight to savour with the pita bread that I dunked into James’ bowl.

Yeah, I have no shame, but give me a sword, and I’ll be hunting for samples of what my friends had so I can give the Penny Farthing pub a fair assessment. All restaurants needs to be visited more than once in order to know if all their food is good.

J: I thank my ancestors that Ed wasn’t wearing a kilt that night or else it may have been more than just a sword that would’ve dipped into my gravy. And count me in as a Penny Farthing Loyalist. The cozy atmosphere, the location and the service makes me smile.