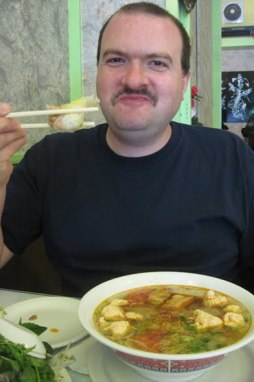 J: I played a little Russian restaurant roulette recently. It’s where one travels to the downtown core of quaint little Victoria. From here Ed places his faith in me to wander the streets before my stomach tells me to walk in. Will it be good, bad, a classic or just a night of taking Gravol?

I settled on a little Vietnamese place decked out in fake flowers but with a yellow and green colour paint combo that was oddly appealing.

E: Pho Vy sat on the opposite side of the road, where Pho Hua is on Fort. I checked out Hua a long time ago, reviewing it for Nexus, and wasn’t too impressed, but Vy had a different atmosphere.

I was looking back and forth for a while so yes, it’s easy to get dizzy on Foodie U, a three-block strip that starts on Fort and Douglas and it runs to Blanshard. I saw this term coined in an article printed on the June 22 paper edition of Saanich News.

Given the number of cafes and restaurants that line this strip, wondering which Vietnamese restaurant to go into was a gamble, but where we went was one that paid off.

I saw the whole clan not only serving customers but working in the small but cozy kitchen. And speaking of cozy, I had little trouble settling in as I browsed the menu. I ordered a Bun Rieu Cua (crab and shrimp noodle soup) with Cha Gio (spring rolls) and Goi Cuon (shrimp salad rolls) for appies. 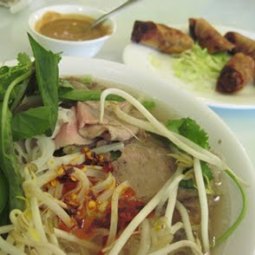 E: I’m not sure if everyone working here was the same family, but a few individuals who worked here seemed indifferent to whoever wanted to come through the doors.

With James looking like the prerequisite stranger in a strange land, we soon settled in here anyways for some okay service. We didn’t get plates to separate out our appetizers until later, but once when that mistake was fixed, we started to enjoy our meals. I opted for the special. the “Dac Biet” ($8.75) which included as many parts of a cow as possible–I needed my beef, flank, veal and tripe, and they were very nicely done.

Alone the bowl had some good colour. But after decorating it with greens and kicking it up with some chili oil, this was a meal I could be proud of.

J: The man was welcoming but the woman could use a lesson in proper hospitality. We were brought water straight away but of the tap variety. It wasn’t until half way through our meal we actually received a refill, but this time with ice.

Maybe the extra touch is a perk for the customers who sit and order? Would she have been surprised if we skipped the bill. Imagine the expense of the ice alone.

We were there after the lunch rush but even with that in mind, I thought our food took little time to arrive at our table. The look of surprise on my face when I saw the size of the soup bowl and the portions I was given. One could learn to love Vietnamese restaurant food.

E: And James didn’t even spill a drop. It was my turn to make a mess at the table, but that’s only because of all that oil from the hot sauce spooned up gave the two rolls we had more life to it. Add on top some more peanut sauce over the lettuce, I enjoyed these rolls a lot more.

Without it, the black tiger prawns simply paled. I also thought there were more veggies and rice in this roll than meat, but at least the Goi Cuon, was more tastier since it was deep fried with some sweet papaya goodness in it.

J: The peanut sauce came in handy for adding some flavour enhancement to those appies, espescially the deep fried spring rolls. I found the sauce thicker than Culis Market’s but even Culis doesn’t have crushed peanuts thrown in.

My soup was something to crow about. The tobasco sauce added the right amount of hotness to my meal. It took me only 1-2 bites to adjust. It was a pleasure to dip my chopsticks into it’s flavourful waters as every stroke brought something up for me to devour. They could easily give one a bowl of it’s broth to perk oneself up from whatever ails them.

E: Yeah, but that’s only after I showed you that you should use the spoons they provided. James. I also pointed out that the side-dish filled with crispy bean sprouts, fragrant basil, fresh cilantro and tender lime is optional.

While James slowly savoured the meal, I was devouring my bowl down. While he was still sipping, I pounced at the crispy nibblits of shredded carrots and sweet cucumber; I believe they were of the Asian variety, so they had a sweeter flavour to them.

J: Darn those Asians with their hundreds of years head start on vegetable growth! At the end of it all, I was satisfied with Pho Vy. I would definitely visit this place again and I am sure Two Hungry Blokes will in order to see how they fare with a busy lunch crowd.

E: … and those Bánh mì (sandwiches). That’s what I’m aiming for next.

One thought on “Pho Boy, What a Meal!”