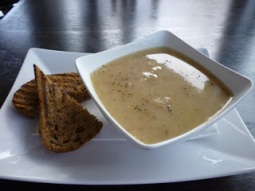 When I’m flying about on a Sunday morning and looking for bargains, I tend to get hungry. Money saved can sometimes be money spent on a nice meal. I had already purchased my usual amount of samosas from the Goldstream Flea Market and baked goodies from Three Sisters’ Tea Tyme Treats (also at the market) before the craving hit.

I needed something to fill me with the energy that I was lacking. Dagwoods Cafe was within eyesight of the market and it was open (that’s always a bonus).

I was impressed with the decor of the modest cafe. One could sit inside for peace of mind, or take one of the exterior tables to bask in the warm glow of mother nature. I chose the former. The design of the cafe is familiar and I can only guess the same architect of the cafe could’ve designed Culis Market in the Reflections Building.

They keep a nice staple of sandwiches, but I wanted something hot. The cream of potato and ham soup ($6) sounded too good to miss. At this place, they rotate their soups daily. The soup was swiftly brought to my table. The needs of the body overrules my logical mind especially where my stomach is concerned.

Accept not a tin substitute here. the soup was obviously made in-house. I could taste the russet potatoes. I wondered what improved tastes there would be if they experimented with red potatoes or golden nuggets.

The Goldstream Station Market starts May 26th and it would give Dagwoods ample opportunity to add “farm fresh” into their pot if they don’t already do so.

Sadly, whatever flavours I could’ve found were hiding behind the outpouring of black pepper. Filling as the soup was, the seasoning was just too much. But the 2 cuts of thick slice Portofino Bakery ultra grain bread salvaged some of the soup’s dignity. Bread toasted in a grill is better than toasted in a toaster and it was here that Dagwoods was spot-on

Normally one would wait until the bowl was nearly empty to soak up the last bits with the dough, but they were being dunked in earnest.

As troublesome as the soup was, I’ll be back and I’ll be tempted to try their Montreal smoked sandwich (rumour has it they smoke their own meats). And perhaps my review will be more favourable. I can’t give up now, Langford needs a decent cafe.