J: Art can make one hungry, actually it makes me hungry and so does watching women but that’s a craving of a different kind. But I was fortunate enough to have art, women and food all in one area. And with the sun smiling down on Vancouver I could appreciate them all.

The Vancouver Art Gallery was hosting an exhibition of the works of renowned artists such as Henri Matisse and Pablo Picasso within their walls of the old Ratenbury designed Vancouver Courthouse.

But there were no walls for the exhibit of life itself, that of people from many walks, be they Vancouverites or tourists congregating for lunch amongst the steps of UBC Robson Square. A plethora of food carts stood outside that Ed and I could choose from. But one scent tantalized my nose and pulled me in like an old Warner Brothers cartoon.

I cased Mom’s Grilled Cheese and looked Tacofino up and down before finding the source emanating from Pig on the Street. And funny enough, judging from their location, they were the pig in the middle. But what a pig! And what a menu.

Our host was played by a man who had an Australian accent, or he faked it. I hadn’t heard a Caucasian with an accent in Vancouver since former Muchmusic VJ Kim Clarke Champniss performed on stage the previous night. Obviously Caucasians with accents are a rare breed here.

E: I could not help but chuckle and shake my head when James eyed nearly every single Asian woman we walked by. Somebody, please, get this guy a girlfriend! Or in my case, a cute sooie that I can save from old McDonald’s Farm.

J: It appears my tastes in women caused Ed’s rolling eyes to switch over to automatic pilot for the duration of our trip. I’ll admit I was observing Asian women (including those two from traffic division on Wednesday night) but I have eyes for all women. But I digress. I only wanted to sit in the square and enjoy lunch served from a street vendor like any other Vancouverite. Pig on the Street has their own version of “take a number” but with little wooden pigs blessed with corny (or should I say hammy) names. I had a little trouble with my order but I lay partial blame on the name of my wooden pig. Apparently, there is no love lost nor tear shed for David Hasselhog. 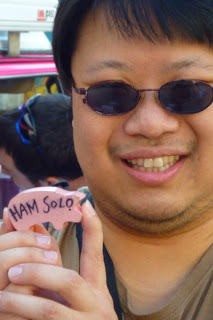 E: The nerd in me wanted Ham Solo, and we had the same meal, the Piggy Blues ($10). I didn’t think I had a contender for the title of Blue Cheese King, but James was trying to usurp my throne. I’m often the first to command, “Give me blue cheese, or give me nothing!”

But in this case, nothing is a better choice. The creamy blue cheese melted too easily and most of that taste was found in the bottom of my meal that was folded burrito style. I could taste a little bit of the sharpness as I sank my teeth in. I was enamoured with the choice of mushrooms though. Overall, I enjoyed the nice smokey taste of the portobello mushrooms. Size means everything in this meal.

J: The bacon was a little salty but crispy salty bacon is fine. The big stumbling block for me and one that may determine their future is how much experimenting did they do with the menu options at hand before making them public. Creamy blue cheese is fine but not when it overpowers the bacon. The bacon is the key and I would gladly pay an extra 1 to 2 dollars for real melted blue cheese. To sum it up, it was filling but forgettable.

E: To come back in a month is definitely in my plans. Mind you, I had to look up where this operation gets their base products from. The people behind this operation are on the right track to being one mean contender in the Vancouver food cart scene.

Gelderman Farms do not use growth hormones in raising their pigs and the operation is Animal Care Assurance Certified. Together, with the Flour Peddler, Klipper’s Organic Acres and Farm House Cheeses, this operation has all the makings for a great product. Even though this operation has been running since May 1st of this year, some further tinkering is needed. I’d love them all to pieces if they start using chunky garlic mayo. In my own kitchen, I find that aioli will add that special kick needed to any BLT.