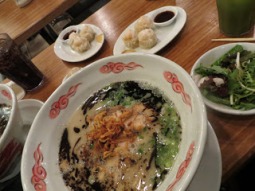 J: Continuing our stop-over in Vancouver, there was one eatery that appeared so inviting that I literally whined like a dog as we passed it. Ed and I were in a mad premature rush to make what I thought was our deadline for the Glass Tiger/Roxette concert.

As we quickly moved down Cambie street I did a sudden mid-step pause. There down the block from the Vancouver Public Library and in the theatre district of Yaletown was one very busy, attractive ramen shop. I was smitten.

E: It must have been love to dine at Ramen Jinya, because I’ve never seen James do an about take, turn around to check this shop’s closing time, and say we should make another stop for a meal after the show. I’m sure he noticed the two attractive waitresses in there and wanted to flirt with them instead. But this time, I had the advantage. I had a chance to practice my limited Japanese.

J: Yes, Ed was in his glory using the lingo of the lovely natives minus the kimonos. I saw straight through his politeness and he offered no defenses as I laughed.

I smelled the powerful brew that was the Tonkotsu Black Ramen dish ($10.75) as it was finally placed directly under our less than chiseled chins. 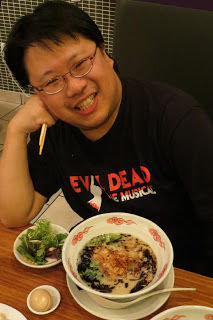 E: And I found most of the scent enticing and delectable. The char-siu was very soft and braised. If this pork was offered separately, I’m sure I could suck it easily off the bone and leave nothing behind. I found the soft yolk eggs to be a unique touch, and unless a diner is careful, they may not notice the pieces of nori that’s served on the side. Unfortunately, these were nothing special.

When James complained of the way the noodles were cooked, I only drew up the comparison that they were served el dente, probably intentionally cooked that way, which made them far more tastier than what I’m used to. The combination only made me slurp my dish down until the bowl was empty. The smoky crispiness of all the flavours combined into a single bowl tasted like absolute perfection. Customers just have to bear in mind that Ramen Jinya offers designer style ramen than the traditional.

J: I summoned up images of a witch’s brew in a black cauldron in what I ate. This was going to be a whole new experience and I was either going to love it or suffer an adverse effect and find myself waking up in an alley sans my wallet.

E: I’m getting the feeling BambooShrimp Marketing is probably trying to go for a strangle hold in the Japanese food scene in Yaletown. They manage this shop as well as Ebi-Ten a few doors down, and even DonburiYa further west, I can definitely say I like this Ramen shop a lot more than Ebi. The next time I’m in Van, I’ll have to test three for three and see what DonburiYa is like.

J: I like Ebi-Ten for being a cozy place to share a fast meal with a friend or loved one. However, Ramen Jinya isn’t like Ebi-Ten and I’m very grateful for it. If this were the case the two shops couldn’t survive just a block or two apart. Ramen Jinya is more suited as one of those open fun eating establishments you can bring a group of friends or your sports team to.

They were open late on our last night in Van (11 pm). Ed and I had a very helpful Yellow Cab driver who took us from Rogers Arena to the doors of Ramen Jinya. The first words out of my mouth as I rushed through the door was “Are you still serving?”. A gentle smile from the server and a simple “Yes” put me at ease.

I spent the last moments of the night eating a dish I had never encountered before while watching a Hey! Say! Jump concert projected on the far wall. I could only assume they are the new kings. SMAP are probably too old to hold the crowns or are too old to care.

Maybe performing a singing/dancing duet with Pink Lady was too silly for SMAP fans to even contemplate.

One thought on “[Vancouver, BC] Oh My Jinya”