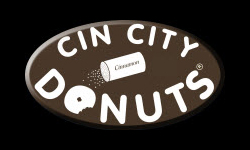 E: Walking through Rogers Arena was like walkthing through some of the best that commercialism can offer during a concert. All I cared for was a memento of the night but the sight of doughnuts caught our attention like two Homers from The Simpsons. We decided to wait until intermission to get our sugary delights.

J: But Ed forgot the delights. Under normal circumstances, Ed forgetting the cinnamon treats would get me worried. As Ed conversed with our next row neighbours, Peter and Akiko, I slipped out and came back not only with the cakey delights in question but an autographed Glass Tiger poster. Ed skipped any wow time time to touch my newly acquired gain and fondled the small cinammon rings instead.

E: While I only took three polite pieces, James nearly ate the whole bag! Well, he did offer our new friends pieces too, but I was amazed at his verocious appetite. That meal he had before was like a hamburger to my pizza slice. I was content with my bottled green tea and I was very thankful I had that to help wash the doughnuts down with.

Without it, my mouth would have felt like a dry riverbed. The cake based doughnuts were not my cup of tea. I’d rather go for the doughnuts that Bubble Tea on the Run in Victoria offers. Back home, theirs were simple, sweet and light. Cyn’s concept was toasty, heavy and dry. I thought I was eating bread. Maybe the staff here didn’t let the yeast rise properly? Or perhaps the local operators were too quick to get the dough product out of the freezer and they simply failed to get it to proper temperature.

J: I concur, it’s great that Cin City has the space they do in Rogers Arena but if yoiu’re looking for delicious doughnuts, I would try elsewhere. They’re not much better than Tim Horton’s but if you’re hungry for something sweet and walking out on a rock star concert isn’t an option, this internationally based franchise is your only choice.