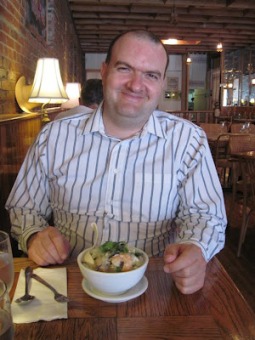 J: Even with the sun shining and the day looking as beautiful as it did, it was still a tough one for me. I took communion and gave special prayer at Christ Church Cathedral. My thoughts were on my co-worker who is suffering from Stage 4 leukemia. To say I didn’t shed a few tears would be a complete and utter lie. Thankfully Ed was there to help take my mind off of the bad things in life.

Our scheduled lunch at Sockeye Sushi fell through and it was then that I learned that Urbanspoon can’t be right all the time.

E: The next time we plan for Japanese, we either wait for an evening or phone ahead. But after doing some wandering, we settled at Siam Thai. Knowing that James doesn’t handle spicy well, I was surprised I didn’t have to drag him in kicking and screaming. On the menu, the spiciness is optional. While I could have gone hog wild, I just fanned the flames by going ‘vegetarian’ of sorts. That’s a first for me.

However, that Mee Krob dish ($8.95) I had was hardly an appetizer. I consider that alone to be like a complete meal. I liked how the rice vermicelli was crisped. It was not greasy at all, and the sweet flavours piled on top made the tofu bits taste meatier. I was left wondering where is the shrimp? I think what I ate missed some key ingredients.

But the real head scratcher was with me wondering where the egg is supposed to be? None of the toppings really stood out as being distinct.

J: I couldn’t help Ed come to grips with his problem because I had my own staring right back at me. I ordered their Siam Garden Delight ($9.95) which consisted of stir-fried mixed vegetables topped with peanut sauce. But for starters I tried their Siam Sukiyaki ($8.95).

The soup was generous in its ingredients: prawns, squid, vermicelli, wood ear mushroom and vegetables. All that combination was wasted because of the dressing. Basil was all I could taste. Now they either need to take out the basil after soaking it in the broth or just use less in the future.

E: I’d have to say to offer less would be more than ideal. I went wild in wanting to savour as much prawn as possible. I had the Goong Tod ($9.95). This dish was made of deep fried golden battered prawns. Shrimp chips decorated the plate and they were quite decent. However, they did not have that extra flavouring that Siam is supposed to be famous for. They were just chips with all the right textures but without that uniqueness, well, I just let James eat it all. He’d eat anything.

J: The last time I tasted chips similar in nature were those sold at Woolco in the now missed (at least by me) Town and Country Mall. But my problem still persisted. The Garden Delight was absolutely delicious. Fresh vegetables and a peanut sauce which contained crushed peanuts was a winner. I almost gave the dish a gold star … almost.

E: I need to take James into Victoria’s Chinatown more. There are some good bagged shrimp chips to be found. But nothing beats the taste of one freshly out of the fryer.

J: Now here is where the problem gets complicated: the sukiyaki. After eating the last of the basil and letting the bowl sit for a spell, the flavour of the broth changed. It was full of the flavour that was sadly lacking from the first sip. A better dinner, yes? Well no. My Garden Delight dish became less desirable with each forkful I took.

Near the end, the peanut sauce tasted (and appeared) like mud. The liberal amount of this sauce ruined a good meal.

E: Or in my case, overcooking the prawns. One plate was impeccably perfect, and the other, tasted too dry. I was chewing on rubber. I wondered where the garlic flavour was? I’d advice not ordering from the chef’s special menu especially when they forget the selling point of this particular item. Was the prawn supposed to be dusted in a garlic powder? If it was, I could not taste it.

The slaw did help make the crustaceans taste better, but not by much.

J: The peppercorn prawns were definitely dry and sadly, peppercorn was the only taste I could notice. At least Ed enjoyed the smoky slaw. I felt the slaw needed to taste fresh and cool to counteract the prawns.

Siam Thai is listed on Urbanspoon with an 88% approval rating. The rating should be used more as a rough guide and less as a definitive one.