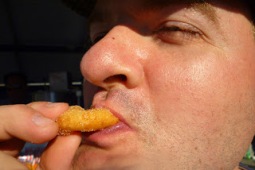 J: Sunday should be a lazy day, a time for relaxation and reflection, for watching what garbage they put on TV before changing my mind and renting a movie from Two Thumbs Up. But none of this occurred because I bused it to downtown Victoria for the International Chalk Festival (and any excuse to eat at another restaurant).

And with my old best friend Ted Ekering off in Japan enjoying the spoils of an otaku/toy junkie for these many years, I hung out with his replacement. It was none other than the improved best friend TX-2000 Ed Sum.

E:  Now since when did I become an android? Well, while my leanings are towards Futurama than Terminator (did we really need that third movie?), I felt like Bender. My weakness for sugar meant a detour to Oh Sugar, for a restock. They finally received some Chocolate Frogs from the Harry Potter retail line. While they don’t look as good as those pentagonal boxes from the movies (or buying them from the Orlando store at the World of Harry Potter attraction), these were good enough for me. If I ever end up in Florida, people better arrive with a bank account from Gringotts. I’m fairly sure the items bought in here are exclusive than the retail version. 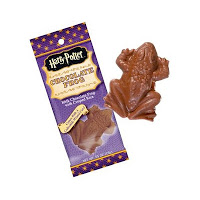 At nearly $7 for a foil wrap than box, fans are paying more for the name than product. The chocolate tasted somewhat like Lindt’s.

But the true dessert was waiting for us at the Inner Harbour, for a second dose of sweets!

J: Okay, my chocolate frog was given to my dad as a gift but I insisted the hologram card of Rubeus Hagrid was compensation for the price of that frog. But yes, the real treat was a food cart owned and mostly run by Sylvia Chu. On this day her parents handled the business and what a nice little business it has been for the past 8 years. Where sugared mini doughnuts and I’m sure a smile or two are made. And that was our craving. Sure we could’ve tried their bubble tea or other products but we needed to reinforce the difference between BTOTR and Vancouver’s Cin City which made a similar product.

E:  Like I told James time and time again, like a trained young John Connor, “I’ll be back,” and I offered guidance to where good doughnuts could be found. I’ve had the golden nuggets from this operation before at least three times now, and it’s hard to beat a winning formula.

J: Ed likes to prove he’s right once in a while and I don’t doubt he celebrates behind closed doors by dancing like a Zulu warrior. These doughnuts were soft, moist and if I may swear, damned delicious. The only other doughnuts that matched these were mini cinnamon’s sold at the Sidney Summer Market many years ago and in more recent times, the chocolate monstrosity spawned by B-Red Bakery.

E:  And we could have had three times the pleasure too, but B-Red wasn’t at the Bastion Square Public Market. Such a shame. I really wanted to see what James does on a sugar high.