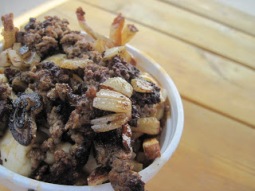 Just how much poutine can one bloke have? Fortunately, when the portions are decently sized, plenty!

As some readers may know, I love a good french fry. And very rarely will I venture into James’ territory, Langford, to test the places that he has no time to hit. That includes a food cart operation that touts some good ol’ fashioned poutine. While most of their food is touted to be made with the heart and soul of a native Quebecois, well, is that just fancy copy writing or is that true?

Now if these fellas said it with more zest from a native resident, I’d be amazed. Phonetically, I’ve heard a few people pronounce this gut-killer, “poutzin.” Even Will McDuff, my best friend from my university days, said it that way, and he’s moved back to the East coast. Maybe I should visit him to get a taste of the real deal. But in the case of what to go for on the west coast of Canada, and on Vancouver Island, Le Belle Petit would have had competition!

If it wasn’t for the sad fact the L’athentique truck burned down in August, the battle would have been fierce. Sadly, this article is a bit of an eulogy until the brothers Tony and Sebastien get their operation back up and running.

The good news is that according to their latest Facebook posts, they’re looking to get back on track. All they need to do is to get a new truck, convert it, and create some new menu delights.

I hope they’ll be up and running by late November, if not sooner.

At least I had the good fortune to at try them out and say they are an operation worth making the trek out to West Shore for. What I remember is a very good crunchy fry. And, depending on one’s appetite, people can order either a regular or large sized dish. Had I tried the latter, I’d probably have trouble walking uphill to the bus stop. I should have gone for their daily special, the La Quebecoise. It consisted of maple syrup, hot dog, smoked onions and bacon. But I was craving beef and it was lovingly smothered all over the fries and within the bowl.

Had I let the dish sit for a while, I’m sure the curds would have gotten softer, but I was chewing them with abandon since it went well with the grilled white onions. I must say, the onions was what made the dish truly delicious than the traditional trinity of essential poutine ingredients.

At the Westshore Town Centre, they are a welcome addition and a very good excuse for me to visit James more often than vice-versa.