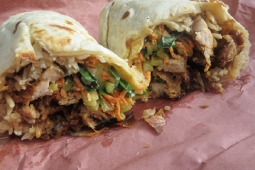 ¡Ay, caramba! Fusion cuisine is nearly all the rage these days, and at Taco Justice League (TJL), they’re reinventing the tortilla in a food truck. This place serves soft tacos with a variety of fillings. From deep-fried tempura avocados to brined pulled pork, each food offering sounds delicious.

This operation is a block away from ‘The Pandora Strip.’ It’s located right between Wellburns Market and the art gallery. I’d make the trek to the fringes of town just for another burrito, or maybe a taco, especially when the Fringe Festival kicks up. 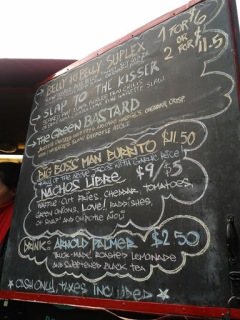 I tried the Big Boss Man Burrito ($11.50) and had to get an explanation of how their chalk-board menu works. You get to choose one of the three fillings that are listed on top of the picture. The foundation of the burrito’s flavor can be found in the garlic rice and the scent is a delight. The pulled pork is the best I’ve had in ages. The overall taste can easily put The Pig’s to shame. The pickling of the veggies brings out the flavour of the entire wrap and the hot sauce certainly gives the meal zest.

I even tried their Arnold Palmer ($2.50), a combination black tea/ice tea drink. I can see this drink selling well during the hot season. It just needs a bit of tinkering to lessen the overall sweetness. Now if only a spot of alcohol can be added … but beggars can’t be choosers.

That also includes my hankering for hard shells. At present, Taco Justice League only offers soft shell products. While this operation’s heroes are not turtles in a half-shell, maybe they will come around and offer the hard crisps eventually. I’m interested in tasting this in a combination of tortillas with pulled pork on top. Hopefully this idea will get introduced over time.

When I was asking questions, I was told that the random special of the day can happen. Patrons should visit TJL’s Facebook page often or phone ahead to find out. The cool part is that this operation will take in advance orders and cater too!

Thanks to this latest entry to the Victoria scene, maybe more independents will start up more food truck operations in Victoria. I can safely say Taco Justice League has saved me from my hunger pains. They offer satisfyingly filling meals for less than $15.

However, patrons should take note of this bit of news. They’ll be open until this Sunday, Feb 17th before going on a vacation/taking a break. They promise to return by early April, perhaps with some new ideas inspired by their trips from afar. Let’s hope they don’t return with some Kryptonite.