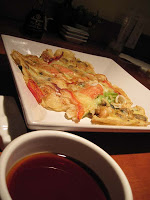 E: I honestly should not leave the decision-making to James and his frugalness to suggest that we try out Stone’s Throw Restaurant. One look at their small buffet table and I was ready to high tail it out of there. It was not because of the food, but I don’t see three buffet warmers to be a shining example of what a buffet should be.

I’ve been to enough to know that a smorgasbord of visual delights be offered to entice diners in, not something out of an archaeological dig! And between the two of us, we’d most likely clean their taco offerings out in no time and be kicked out afterwards.

J: The buffet was much like the old Atlas ads in the comic books. Well this buffet could’ve had sand kick at it and not do a damn thing in return.

Feeling disheartened we travelled up Douglas Street looking for anything edible, okay almost anything. Ed had a very particular appetite whereas I could eat anything placed before me. A bright light came upon me and I blurted out “Sockeye Sushi.”

Ed followed me like I held the Ten Commandments.

E: Actually, we had planned on visiting this establishment but kept on showing up at either the wrong time or the wrong day. While we did contemplate two other places, even James’ laziness knew no bounds; he wanted someplace close, within a two block radius whilst I could’ve crossed the River Nile.

But yes, like a gullible fish to bait, I didn’t resist. Finally, I got to try Sockeye’s fusion cuisine. I wasn’t disappointed and I chewed the Caterpillar Roll up like it was a soft banana; it was that good, and the artisans behind the bar created a beautiful presentation of okomiyaki sauce, avocado and eel in a tender roll. And the scenes from the red snapper in olive oil; I haven’t had perfectly roasted garlic slices before until now!

J: The interior of Sockeye Sushi was kept the same since one of the previous Japanese restaurant incarnations a decade or so ago. And the quality was still the same with the exception of the taki sunomono salads, it was chilled, lemony and delicious. The size is appropriate for its price but I was still disappointed. For something this good I wanted it to be super-sized

E: I’d love to see a Japanese restaurant offer a dinner sized version of a sunomono salad but I doubt that’ll ever happen. In all my years, which comes close to matching Jame’s age, they’ve always been served small.

But at least the seafood pancake, which I swear is an okonomiyaki, was more than enough to satisfy our hungry appetites! We each had one, and the light crispiness was enough to get me salivating for more. There was a mix of crab, green onions and squid – to name a few – all lightly cooked up on a soft grilled up batter.

J: It smelled delicious and tasted just as good. I was looking it over with the same intent as an anime geek would look over a new Japanese anime super boxed Blu-ray release with all the extras. I was surprised at how many different ingredients I was able to notice in the pancake. The green onion was the most prominent. And the meal was all washed down with a glass of water containing a hint of lime brought to our table by a very on-the-ball server, Ju Eun.

E: I’m fairly sure this dish had a light sprinkling of thinly sliced cabbage too, and coming here certainly filled me a-plenty. But after this brunch, I was astonished to hear James say, “I’m still hungry.” So with an evil glint in my eye, I knew where I was going to drag him to next.