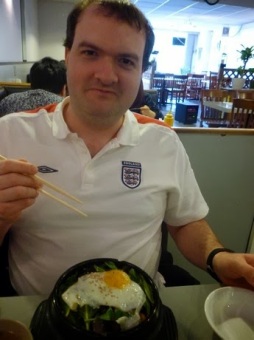 J: It’s always nice to have dinner and a movie when one is planning an evening in the greater Victoria downtown area. On this particular night my friend Ed and myself were highly anticipating a movie we planned to review for Otaku no Culture. But it only made sense to eat at a simple diner rather than spend almost $20 on overpriced theatre snacks. And since I can never drag Ed into Sushi Plus ever again, I chose King Sejong, a Korean restaurant on Yates across from the ol’ A&B Sound building.

They call this a restaurant but I would call it more a diner. It’s a greasy spoon in every detail right down to the booths with customers’ initials carved on tabletops.

E:  The atmosphere seemed okay, but in a block that has seen many shops of different ethnic nations come and go, I decided to stop keeping track. The photos enticed James in and I agreed. As to why I did, will I ever learn my lesson? Well, the spicy noodle soup ($12.99) that I had (Jjamppong) certainly made its mark on me. It etched into my gullet like a powerful brew from the sea that is backed behind a frothing volcano.

J: Ed was delusional with the food but let me tell you the service was almost non existent. Upon entering e were acknowledged from a server who was half a room away. Once she realized we needed a table for two, instead of being led or shown our table, she simply put our menus down at a booth and walked away. Apart from taking our order we were not to be revisited again until I requested our check. It would’ve been nice to have been asked how the food was. But being food reviewers Ed and I never say
anything when asked besides “good”. Always let the business know your true thoughts in the article. But wouldn’t it have been nice to really tell someone there just how poor the meal was.

E:  That’s why I left what I said to be interpreted. Living next to a volcano can be hazardous to anyone’s health. People are taking risks, and I rarely see James as a risk-taker.

J: Our appetizer of Nakji Bokkeum ($16.99), a dish of pan-broiled octopus and vegetables seasoned with red pepper would’ve made for a marvellous meal had the octopus not been overcooked. So overcooked was it that I was still chewing on the last mouthful as we walked into the Empire Theatres. My only hope was that the woman at the desk wouldn’t tell me to spit my gum into the trash bin before we were allowed to continue.

The Hotpot Bibimbop ($10.99) was hot when it came to the stone bowl and perhaps the outer rim of the meal but inside it was cold. And although the ingredients were tasty, the varying temperatures left me feeling indifferent.
E: I thought all the seafood in my dish was overcooked too. There was a rubberyness to the squid and mussels that I had. I wondered if the cooks here know how to serve octopus properly.Maybe it was time to rush anyways, as I wanted to move away from the food to get to see the film we were out on the town for. Like everything else that lurks on this block, sooner or later, everyone will leave (yes I miss the days of hanging out at A&B Sound). The only thing keeping people around is that this side of the street is what connects the bus routes to the west side of town, Esquimalt.