Plenty of green tea flavours can be found over in Oak Bay. Practically next door to each other are Kissako, a green tea cafe, and Just Matcha, a store that specializes on that particular brand of tea. I was in this municipality to watch the filming of Gracepoint, a US remake of BBC’s Broadchurch and I’m always keen to learn from the pros by careful observation from afar.

I have the educational background to know what I’m doing in a newsroom, but as for a film/tv set, I feel I’m not not quite there yet.

But when stress levels get high in an occupation that means being on the run (production can see a lot of that), I can become zen-like at Just Matcha. They’re a reasonably new operation (three months) that opened up here. They cater to enthusiasts for this particular blend and carry a fair number of imported products from in-town (like JagaSilk’s products) to Japan (their primary supplier is from Uji, Kyoto).

They even carry a candy delicacy. I could not resist and had to buy two bags of Hachi Matcha White Chocolate, hand made in town by The Awesome Possum Tasting Company. While there is a soft amount of sugar used, the flavour is quite nice. The ingredients lists Yabukita Cultivar Matcha tea powder. Between nibbling or letting it melt in my mouth, I much prefer the latter method. It’s far more tastier than the really sweet Meiji chocolate that’s sold en masse. 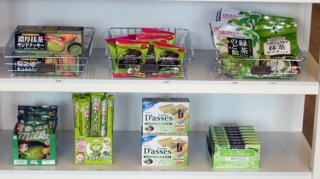 But for this tea house, their window display of a special Winter Olympics 2014 blend, a maplematcha latte, drew me in like a moth to a flame. The maple syrup made for a smooth tasting drink, and a touch of chocolate shavings only made this drink all the more exquisite. Whenever I’m getting a drink here, I’m sitting down to enjoy my nectar.Being on the run with what they offer here just will not do! But I’m sure for Olympians, it will not matter since they burn off their sugary infusion in seconds –and I’m not talking about performance enhancing drugs. 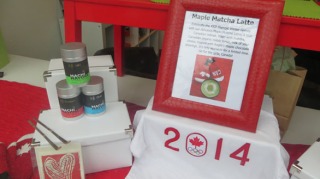 I like how this operation works because patrons can choose any cup that’s on display to drink from. They’re regularly cleaned in a dishwasher so people should not worry about germs. The sizes vary from the traditional cup to the large bowl. Every blend that’s on display is available to drink.The operator, Kip Home, that I talked to while looking around the store is very friendly and it made for a soothing Modernist style architectural atmosphere to enjoy myself in. I’m certainly going to be back whenever I hear filming is happening in Oak Bay for Gracepoint. The fact they’re located a couple of doors down from one of the main shooting locations is going to make my visits very frequent! 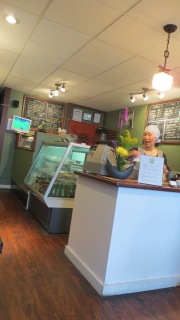 However, should I just want to crave a regular sip of green tea, Kissako also works too. This mom and pop operation has been around for some time, but I never thought about appearing until now. The one thing that stood out for me is that the tea is brought to you with a decanter of hot water and a minute timer to properly let the tea leaves steep for the right amount of time. Just pour and serve. I have not even found that in the trendiest of Japanese restaurants in Vancouver or Whistler and those other places can learn a lot from Kissako!

Here, they treat their tea with respect. Even their food is quite nice. I came in when the product was fresh. I opted for a simple tuna and salmon roll. The prices are reasonable, as one would expect for these times ($4.50 per maki order), and I found the tuna to be the far superior fish of the day. The salmon was nice. Even the rice was done properly and I could taste it at every bite. I managed to have a decent lunch for under $15.

There was one thing I have to note after watching Jiro Dreams of Sushi. The nori sheets could have benefited from being treated over a coal flame to bring out its crispiness. That’s more of a nitpick detail in an otherwise fine operation. And I’m fairly sure the husband and wife team that runs this new operation were the original folks who ran Futaba in downtown Victoria.

The next time I’m here, I will have to try the bento box. I saw that as the dish another patron ate and it looked good. I’m rarely one who wants to go bento when salmon and tuna is all I want.As for the cast and crew of Gracepoint who do not want to venture far for a chance to relax or have a quick bite, I think these two nearby establishments can neatly fit the bill. The food they offer is very healthy too!