The Victoria Fringe Theatre Festival is here and there is no better time to get yourself an artistic shot in the arm than during the month of August. It is during this month that many theatre companies take a much-needed rest after the year’s hullabaloo. People of the arts need their time at the beach too.

Now I am not one to talk. My experience with the Fringe is not on such a grand scale as my best friend and writing partner Ed Sum who has been Fringing since 2009. To admit sheepishly that I have only seen one Fringe show ever, and that I’ve only gone to St. Michael’s University to see a show, it is them who have that distinctive honour of opening my eyes wide open. It was their stage version of Avenue Q last year that finally pulled me off the fence to land onto the well-trimmed green front lawn of the Fringe.

Before Avenue Q, my earliest memory of knowing the Victoria Fringe Festival existed was a play that took A. A. Milne’s Winnie-the-Pooh characters and thrust them into the harsh realities of frontline World War I. It was the first Fringe show I had an urge to see.

But my journey to the Fringe started many years earlier. It was a small theatre company, then located in Victoria’s Market Square, that showed me you don’t need a large cast or even a large stage to entertain an audience. Clayton Jevne of Theatre Inconnu would prove this many times over with his one man show of Hamlet, but it was his protégés performing William Shakespeare’s The Tempest and Richard III, they became a vital part in my education of the arts. True artists don’t always need the wood of a Phoenix Theatre to enrich people’s lives, all that is needed is the earth they stand upon.

Many of the Fringe shows this year look intriguing if not entertaining. And of those from the list I have made my own choices on what is a must see for the 2014 season. Presented to you in alphabetical order are the top ten shows that should not be missed.

Confessions of a Redheaded Coffeeshop Girl

Bored at work, feisty anthropology grad Joanie starts studying the “animals” (aka humans) of her coffee shop as though she were Jane Goodall herself, bushwhacking through the African jungle to observe the chimps. Live music, co-worker showdowns and a gorilla for a boss: included!

The Hatter is the story of a man trying desperately to get home. (It is also a tea party!)

The Hatter has lost his madness, and now he needs your help. Come join in this performance jammed with storytelling, a song, emotional problems, and a chance to BE the Jabberwock. With free tea!

James and Jamesy In: High Tea

NEW SHOW by James & Jamesy (2 for Tea). When the world is flooded in tea, England’s well-loved comedy duo cling to their friendship and spectacular imagination to keep them afloat. Bring a teacup.

May & Alia Do Pirates! (of Penzance)

It’s the chance they’ve been waiting for. The cast is missing in action (it’s possible someone forgot to call them) so now May & Alia are going to have to do the whole of Pirates of Penzance BY THEMSELVES. What results is a light-hearted, clowning, puppeteering musical which condenses 2 Acts of Pirates into a 55min musket-blast of awesome.

An underemployed artist lands the job of ‘poet-in-residence’ at a high security prison. Follow him into every dark corner, helping dangerous criminals to escape… through creative expression!

Damsels, distress no more. The Princess Rescue Force is here!! Two young recruits set out to earn their tights within this prestigious company of men… only to discover that “happily ever after” is hard to find. Dragons have to be slain on the inside; love at first sight makes you question your sexuality; and kissing sleeping beauties is a criminal offense.

“Laugh and the whole world laughs with you. Weep and you sleep alone.” She’s a comedienne and singer, cabaret star and headliner at the Ziegfeld Follies. It’s the heyday of vaudeville, and appearing—for one night only!—is ‘Red Hot Mama’ Sophie Tucker. 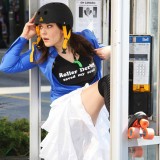 A shy comic book geek discovers roller derby and finally becomes the superhero she’s always wanted to be in this action-adventure comedy on wheels.

Join in on monstrous mania in this contemporary tongue-in-cheek parody of the horror film genre, especially the Mary Shelley classic itself! This is family friendly fun, filled with plenty of lively show tunes, performed by a dynamic company of local teen performers. A musical retelling of the 1974 film classic!