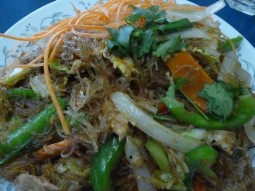 E: So many jokes can be made with a diner simply named Zap Thai, but upon walking in, I wondered if James and I entered a radio fix-it shop or we wandered into a gym. The ornaments were mixed, but it made for an interesting cozy atmosphere where Thai food can be enjoyed in the middle of the municipality of Esquimalt.

J: The atmosphere is as mom and pop as you can get. It is in the same strip mall were once a locally known burger place was situated. I visited the shop in the 80’s but now that it’s long gone and Pad Thai is here, I have a reason to return. And for you young girls, you may appreciate the hunky male server who looked more like he belonged in a gym than a restaurant. Hopefully his lack of enthusiasm wasn’t a sign of things to come.

E: My guess is that he’s the son of one of the cooks in the kitchen. I wasn’t sure in what to expect of this place that’s a few doors down from La Belle Petite. I know the other place is known for some huge portions and this place is just as large. I didn’t quite have the appetite for a proper plate of noodles, so I went for two appetizers to fill me up. And I wasn’t disappointed. The egg rolls were nice and crunchy, filled with the traditional rice vermicelli, onions and carrot. There wasn’t too much greasiness to be found. The huge salad I had, however, whoa. That can be a meal in itself! For $8.50, that wasn’t too bad of a deal. 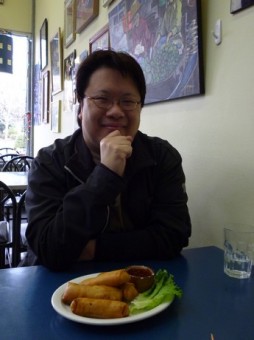 J: I thought the prices were a bit on the expensive size but once I received my Phad Woon Sen, My eyes almost popped out of their sockets and rolled across the floor. The meal was freshly cooked and although the ingredients weren’t farm fresh (the prices would be higher) it was very tasty, I told them I wanted my Phad to be the minimum of spiciness but it was still effective enough to make my nose run. With the amount on my plate I struggled to finish what was in front of me.

E: If only I could have made James look the other way, I would have kicked his meal up a notch by the provided hot chilli sauce that was available at our table. But I ploughed through my meal like it was nothing. The Mhee Grobb was actually quite good. The dish had a gentle fruity flavour throughout and the quality of the veggies were very reasonably fresh, so that every meal was worth its crunch. Mind you, my meal was light in comparison’s to James’ dinner time meal.

J: Can you believe I ate two Nanaimo bars after the meal. I would definitely return here, even for the buffet on Fridays. The only thing lacking in this restaurant was a clean table and a server who’s vital signs registered.