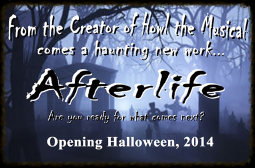 Community theatre is one great way for new performers to earn their wings. In Afterlife: the Musical, youth and adults alike can take part in an ambitious new product by playwright Thom Southwood. His family are active members of the Sooke Harbour Players and for Thom, it’s his works in advertising campaigns for television throughout the 80’s, independent artists and labels in Nashville, Vancouver and LA, and previous contributions to this theatre group (Jesus Christ Super Star (2006), Die Claudius (2008) and GodSpell (2014)) that earn him considerable notice. Unlike earlier years where this group have done adaptations of popular musicals and plays, this latest production is perhaps Southwood’s second most original product to come out of the sleepy community west of lower Vancouver Island. Last year’s show was Howl The Musical, A Not So Classic Werewolf Tale (2009)

Hopefully more supernatural tales will come from Southwood. He pulled multiple duties — namely that of actor, director, writer and music composer — to give this production a love that only an enthusiast of paranormal pop culture can notice. In a story about two lovers who died in a plane crash, just how they got separated is akin to being whisked away by a tornado of fate and landing them in the Afterlife. They died, and the silver thread that kept them together is severed.

Amanda Marshell (Kiarra Balzer, seen center) is lost, and whom she meets (from left to right) — a Sage (John Bidner), Warrior (Joel Southwood), Atlas (Paul Holmes), Host (Thom Southwood), Mirth (Sammy Radelfinger), Charm (Melissa Curtis Perry) — offer help in a style reminiscent of Wizard of Oz. However, no yellow brick road exists here. Her boyfriend, David (Samuel Southwood), lands in a the grim realm where a wicked Witch of the West (better known as the Queen of Heaven played by Leighanne Georgeson) takes an interest in him. This lady hardly lives up to her title and is more like Maleficent. She seems to have been corrupted much the same way the angel Castiel was in series 7 of CW’s Supernatural. This particular season showed him assuming the role of God and requiring everyone to follow him. Just like this television universe, souls are a commodity; they function like batteries to empower the greater forces that rules the realm. The more they consume, the more powerful they get. 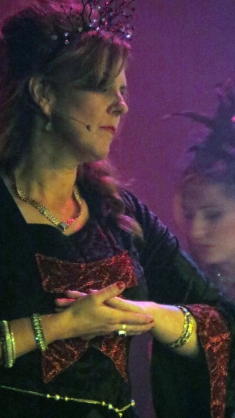 The Queen of Heaven
(Leighanne Georgeson)

Just what Marshell has to do is to find a higher purpose. What she embarks in is almost like a trip through Dante’s Inferno or The Devil’s Carnival, a horror movie musical by Terrance Zdunich. Amanda discovers aspects of herself that she once greatly feared, and she must overcome each and every one of them if she’s to find David and meet the Queen of Heaven. Only she can grant Amanda safe passage to what’s beyond but because she’s been twisted, she’s more interested in consuming her soul. This “Afterlife” is more of a way station for people to idle in before they can move on to Nirvana. No grunge music is really heard here, but a tribute to jazz, vaudeville, hip-hop and rock n’ roll can be grooved to instead. The sound is contemporary and the various blends of world music helps give this production a Lord of the Dance and Little Shop of Horrors feel. The live violin music certainly adds a liveliness to this production.

Also, a touch of sublime horror is injected into the “Darkwraith Anthem.” Sometimes heads have to roll in a Pink Floyd fashion, and fortunately what’s sung is not necessarily about not needing no education. It’s in who’s in control. For “The Doll Maker,” Tara Ceraldi Pugh certainly got into the spirit of channeling a wickedness of why decrepit dolls are decidedly evil. Her experience from the Pacific Opera Victoria certainly shows, and when Perry joined in, the harmonies produced are spectacular. Lyrically, these two songs are exceptionally well crafted. They are the highlights of the Sunday afternoon show along with “Mystabelle’s Lament (I would be Free)” and the finale “This Is Afterlife.”

Even though there were minor kinks to work out in the technical department, from lighting to a few sync issues in choreographing a huge number of dancers on stage, they are mostly trivial in the grander scheme of things. Community theatre is not meant to be completely perfect. The energy by the performance was certainly felt as everyone gave their all. Some characters, especially John Bidner, certainly became very comfortable in their role and it showed in their performances. Siblings Raven and Sonny van Netten even prove they got the moves to rap in the scene where Amanda enters the realm of elves — it seems that in the Afterlife, that’s where these nearly immortal faerie-kind go to die too.

Can the Sage (John Bidner) predict what’s next for the Afterlife?

Perhaps a better name is Avalon when considering the diversity of creatures that are found in this realm. This afterlife is not quite what one would expect since its populated with spiders, dolls, clowns, warriors and lounge singers. Perhaps most of what’s happening lies in Amanda’s imagination as she makes that spiritual journey to self discovery. If that’s the case, anything is possible since the only two concrete realms are that of the Spirit Queen and fae in a conflict she doesn’t fully understand; everything else she experienced is in what she is projecting. Should that be the true narrative, Southwood has crafted a product that has plenty of potential to be expanded upon, if not refined for a cinematic treatment. He explains, “The big questions like what is The Eternal are left open-ended to make the show as accessible as possible for people from all walks of life.”

As for the future of where this play can go next will depend. This director revealed that the next step is to find a public relations firm or agent who has the interest to help take the show further. Investors are certainly needed to finance taking the show on the road, if not to up the production values. The light show was certainly on par with what many would expect in a small theatre group production, but to really have a proper tunnel of light blazing in Frankie Goes to Hollywood fashion means a technical coordination that small theatre may not necessarily afford. A vision is everything, and where this play goes next can be a bright one for the production team involved under the right guidance. All they have to do is follow the light … it’s pretty.

Tickets can be bought in advance through Eventbrite or at the door.

One thought on “An Afterwards in an Afterlife (of) the Musical, A Review”