A visit to the area known as Mattick’s Farm can only mean one of four things — you’re there to golf at the nearby Cordova Bay Golf Course, eat at Adrienne’s Restaurant and Tea Garden, shop in one of the many boutiques in the strip mall or buy food at Red Barn Market. I was there for half of a briskly cold day to warm the cockles of my stomach. I’ve heard Red Barn has some of the best and thickest sliced bacon on the island (from Metchosin Farm in what I found) and that I must test and have a snack at the diner. It’s small cozy atmosphere was just right on a busy day. The smell of Christmas was in the air at the nearby shops and although it’s not a place I’d get sundries from, I’m sure what’s offered is as great as stocking stuffers and tokens to visitors who are not from Victoria.

With the bacon and meat mission fulfilled, a burger was on my mind since the food is alleged to be made fresh and local. The listing of seafood felt unusual even though that was what caught my eye upon entry. To the left of me was offerings from the bakery (um, where is the oven hiding?) and to the right a full service restaurant. The prices were a touch on the high side and upon investigation, I’m definitely not here for the ice cream. Island Farms does not mean much to me these days. I finally settled down to order my lunch and was pleasantly surprised that what they offered as a burger combo is a better choice for a balanced meal. Instead of forcing french fries to the customer, a garden salad is included with the Mattick’s Farm Beef Burger. 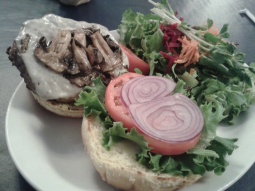 The combination of carrots, cucumber, beets and green lettuce was crisp and the added sprouts on top was a nice touch in this presentation. When the server realized that the people at the kitchen gave me the wrong salad dressing, she apologized and went to get me some blue cheese.

The burger itself was satisfying. The patty was a little suspect, looking more like something made out of a press; in taste, however, I could sense it was recently ground and then baked with cheese on top to give it the nice coat that I found. I enjoyed the layer of thinly cut red onions, fresh lettuce and sautéed mushrooms added to this burger. They must’ve somehow learned that’s how I like to make my burgers at home. I use bearpaws (their nickname for a massively thick beef patty) from M&M Meat Shops myself, and here, I reckon they might be from Red Barn sourcing some Metchosin meat, but I doubt it. There’s no real farm nearby to get meat fresh from the slaughter-house, so the next best thing is to get what’s available from afar. Most of the greens were decent, and I did find the white mushrooms quite tasty. However, in contrast, the bun itself is nothing exceptional.

The big question I had to ask is if this place is decent enough to pull James out of Langford? He loves his tea, and this place is certainly worth the return, to see what finger foods are offered. I’m just here for Red Barn’s bacon although their meat department is negligible. This particular outlet is more convenient for me to reach even though it’s a smaller operation. I seem to recall that the original West Saanich Road location is the one to reach. They have more variety. The next time I saddle up to hit the other store, I’ll have to bring more than a simple appetite. Up the road is The Village where the fixin’s is always good. At Adrienne’s what I’ve seen and tasted is mostly above average.