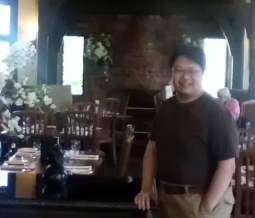 J: When it comes to ghost hunting, Ed never likes to visit a heritage place on an empty stomach. I guess that is why we visited the Fireside Grill.

The tales this building’s owners could tell could make for some interesting pages in a local history book. But I was more interested in the food. Call me uninterested but if we pulled up in the Mystery Van, I would be looking to make myself a hero sandwich rather than looking for clues.

E: Yeah, James can pretty much be like the Shaggy to any Scooby gang should he ever decide to join one. He’s a coward when dealing with spooks but I will gladly try to shake an entity’s hand. Even if I visited a haunted house, I’m willing to bet I’ll find him in the kitchen sooner than later while I go scouting the premises in hopes something supernatural may present itself.

In this fine establishment’s case, it’s to insure that you have plenty of money to pay for the higher priced entrées — burgers included. The beef and crab combo was a taste sensation I had to bite into.

I suspect what the menu is supposed to say is truffled crabmeat.

J: I was tempted to order Salt Spring Island Mussels just for nostalgia’s sake. I know Raven Street Market Cafe on Salt Spring is no longer of this world (speaking of ghosts) but damn it I miss them. I was won over by Fireside’s lamb and gorgonzola burger with greek slaw under the bun.

The prices of these burgers are a little higher than other establishments but you do get what you pay for. The lamb was grilled to perfection, not fried, but at a fancy place such as this it is to be expected. Among the patrons wearing their suits and designer clothes, I really did feel like Shaggy from Scooby Doo.

E: Yeah, I can never take James anywhere classy because of the way he dresses. At least I have a bit of style in my colour coordination when I do want to dress up. In the dishes that were paraded behind James, well I was constantly drooling at the thought of what I should sample the next time I’m here. I throughly enjoyed my burger.

The beef was well ground and had a medium cooked taste. The spinach made for a great complement to the two primary ingredients and the yam fries were totally delectable. I polished them off with ease. The bun itself could have been toasted up but it was presented fresh off the shelf instead. There are times where I feel a crisped bun can do a better job at complementing all the soft tastes contained within and other times where a soft bun can make a difference with a crisped slice of chicken (or fish). In this case, their burgers can do with a bit of tweaking to make it an exceptional meal.

J: I agree with Ed, a soft bun wasn’t needed for this meal. I was enjoying the lamb patty but the gorgonzola appeared to be in sauce form. I’m not fond of sauces but it was passable. The burger still stands above some that I’ve had before. I wonder if the Victoria Burger Blog has ever reviewed this place? I could see a Two Hungry Blokes and VBB team up. Perhaps having a burger at the Fireside Grill might bring Don (of VBB) out of retirement.