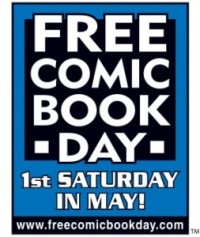 Not only will the city of Victoria, BC get an extra day of geekery on but also, not many cities can lay claim to having four days dedicated to various fun events taking place nearly all at the same time. Here’s a quick summary of what’s going on:

May 1st
Lego at the Library (2:30pm)
Greater Victoria Public Library
Juan de Fuca Branch
This event is technically for children ages 7-10 who want to have fun with the sets offered at the library. Registered participants are also encouraged to bring their own bricks so they can learn how to stack them up in other creative ways for a take-home project.

Avengers: Age of Ultron Movie Premiere (evening)
This movie will definitely delight Marvel Movie Universe fans. Not only does this film continue on from where the first film and Captain America: Winter Soldier left off, with hints of two mutants — Quicksilver and Scarlet Witch — being important in the film, but also this movie will set the stage for the third part of the saga cumulating to Avengers: Infinity Wars.

People going to the IMAX screenings on this day should, in theory, get a keepsake poster while supplies last.

May 2nd
Comic Book Day (starting 10am)
This North American wide event has become the norm. With the Greater Victoria Public Library Central Branch and at least two of the three three comic book stores participating in this city, the fun can be shared, if not spread around. When the stores have to restrict just how many titles readers can grab, all the smart collector has to know is to walk from store to store (and library) to get a good fill.

This year has comics that will introduce folks to the fantastic worlds featured in Doctor Who, the realm where there’s plenty of robots in disguise in Transformers (thankfully not the awful Michael Bay version), the pulps in The Phantom and the mutants in Teenage Mutant Ninja Turtles. A full list can be found on the official website.

May 3rd
Victoria’s Hobby and Toy Fair
(doors open 8am for treasure hunters, 9am general public)
Pearkes Recreation Centre
This biannual show is basically the time to shop for that ‘tough to get a present for’ geek in the family. Either for a birthday or Christmas, there’s plenty of variety (comics, vintage toy cars, Barbie, Transformers, old video game consoles) to be found. Even though the vendors that appear at this show are moreorless the same every year, the stocks vary and only the early bird catches the worm.

May 4th
Star Wars Day
Toys R’ Us (Mayfair Shopping Center) on May 3rd, 11am
Although the only official celebrations happen in Disney Parks to honour Star Wars Episode III as a pun on “May the Force Be With You,” fans world-wide can embark in enjoying local celebrations wherever they may be held. Usually this can be a personal event, with clubs and groups organizing their own party, but for the public, to ensure that youths can have fun, at least Toys ‘R Us have plans to offer brick-building LEGO fun as a special building event.

A bigger show is slated for stores in the United States. For a proper guide of nation-wide events, please check starwars.com for the latest listings or visit a fan-run Facebook events page here.