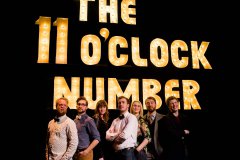 To perform improv on stage must require the talents to think fast and furious. To see that person compose a song on the fly and be funny at the same time has to be commended. In what Grindstone Theatre has provided in their show 11 o’clock Number at the Victoria Fringe Festival 2015, which included input from me (who asked for zombies), I’m very impressed at blending the ideas of a neurosurgeon discovering a miracle in what some brain cells of her boss’ daughter can do and finding a cure to an emerging Zombie apocalypse in Victoria that would even impress Dr. Ravi Chakrabarti from CW’s iZombie. Every night promises to be different, and in what I enjoyed opening night is the comedy from Jordan Ward and Dan Moser when one of them played a gender-swapped role and the two were playing off each other with ease. They even kept the act clean. And to see them ham it up behind the singer made for a hilarious contrast.

The concept for this show is to take a few ideas from the audience — mostly in taking an occupation from one randomly selected person — and the group (which includes Mary Hulbert, Mhairi Berg, Nicole English) will construct a story from it. If more concepts were tossed in, the act might run longer and the team might run out of steam. What’s especially impressive is the incorporation of some sad City of Victoria facts (like the problem of many Starbucks operations are closed early) into the show. That attention to detail brought out the best laughs.

All of these performers have great vocal ranges and styles. They harmonize quite well with each other. With this particular show, its surprising that the musical numbers did not include more Jazz, but the scat style is certainly used to show that these folks can improvise melodies with ease. There was only one moment where one of the boys had to indicate to the pianist, Erik Mortimer, that he needed a cue so he can jump in. This musician even adds a few creepy melodies to go along with the zombie theme for that night and to wonder what else this team can do makes seeing this show again a must. If I can find time to return, I most certainly will. It’s tough to beat a dead-Ed zombie down.