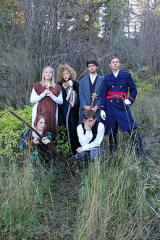 Audiences going to see The Untold Tales of the Brothers Grimm will be treated to lesser known tales from the trio and to quick summarizes of their better known tales. But wait, not everyone will know that the family consisted of nine siblings. Jacob (Josh Sundmann) and Wilhelm (Nich Gulycz) are the duo who achieved wider recognition. Some members passed away before their prime and others were not as involved in these two’s endeavours. What makes this show fascinating is a look into how one of the members of the family really wanted to be part of Jacob and Wilhelm’s life. The mousey Ludwig Grimm (Brooke Baliam) adds an element to the show that helps provide a plot. On the historical front, and perhaps overlooked for this play, is his contribution to the Grimm legacy by providing an illustrative front-piece to a later edition of their book, Grimm’s Fairy Tales.

To help frame the larger narrative, Wilhelm commands the stage when he is at odds with his bride-to-be, Dorothea Wild (Brittany McCarthy). Her sister Lisette (Meagan Petrie) is also present for the ride. As they fight over who to tell the tale within a tale, four stories are wonderfully told (played out on stage by the six person cast which includes Melissa Thomas) and examined. Even a bit of pantomime is used and that helps give the show some variety in what is mostly a dramatic presentation. For parents in the audience, even the question of are any of these fairy tales safe for youths to read is explored. When considering “Frau Trude” is the darkest of the four stories, not every child will find every one of Grimm’s tales as enjoyable — especially when the original tales suggested brutal methods of how some supporting characters die.

For the night, even Death lingers around Ingmar Bergman-style in “Death’s Messengers.” The costumes used in this piece are wonderful. Harry Potter’s J.K. Rowling may have been familiar with this tale when she crafted “The Tale of the Three Brothers” for when one of the three hid from Death for a long time with an invisibility cloak finally decided to remove it. Both he, like the young man in Messengers, decided to embrace Death with no complaint when the time has come. Folks expecting simple camp-fire tales get more to leave with in Chimera Entertainment’s production.

The night is presented in a mix of scholarly exposition, clever comedy and family drama. The performance wasn’t without a few tiny issues. There was a moment or two where the cues were missed or a bit of prodding was needed. At least this production reveals that there’s more to the Brothers Grimm than the stories they have compiled together. They are a family who needs to find the ties that will bring a mutual respect for each other, and that’s a glorious message to end with.

One thought on “[Victoria Fringe Festival ’15] The Lexicon of the Brothers Grimm is Fully Explored in The Untold Tales, A Review”