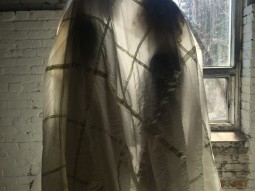 The geek in me really has to ask: do androids dream of electric sheep? Can bears even recall what they ate last winter? When they hibernate, just what motor functions truly shut down? If I’m beginning to sound like Jerry Seinfeld, I apologize, but I just have to get this indulgence out of my system. The reason why I ask these questions is because the world created by Ian Ferrier is not about the future but is in regards to Canada’s past. The themes found in Bear Dreams are very closely related to Philip K. Dick‘s tale in how animal species are disappearing. Here, the question of what European colonization of this new world has done to the wilderness for these creatures, First Nations tribes included, is explored. In what I’ve noticed, the creatures are symbolic of a heritage being destroyed and must be recovered.

I can not help but be reminded of what I saw during the Victoria Film Festival early this year; The Lodge showed how isolation can madden the senses if the colonists do not learn how to adapt in the harshest of climates. Ferrier’s play is more focussed on an even harder situation, surviving the most difficult of Canadian winters. The past is expertly explored through a lengthy discourse that goes as far back as the Ice Age. The aboriginals time back then does not feel necessary.

What’s more important in how two unnamed individuals, one presumably native, (played by Danika Cormier and Joachim Yensen-Martin) embark on a quest to find Winter’s soul. They have no speaking role. Their act is expressed through dance and Ferrier provides all the narration and musical exposition. His soft-spoken voice does not always work. A greater intensity is needed. While he does not have to channel David Attenborough, a greater gravitas is needed to sell the work that’s only been recently developed for the Fringe circuit.

In what’s solid is in the interpretive dance that is illuminated by two lighting elements. They help create brilliant moments where the performers have to dodge under or around them as they orbit around an invisible centre. If they are meant to be symbolic of the sun and moon to indicate the passage of time and the seasons, perhaps one should be coloured red and the other gold. It’s easy to suspend belief in the fact they are not perfect orbs, and maybe later shows can fine tune the luminary presentation. In how these two objects are used now, they function more like will o’ wisps than representations of either the solar or lunar calendar.

This play functions quite well with the bare necessities, but its pacing is what nearly slays it. With a bit more finessing, this aboriginal tale can keep kids at the campfire in awe instead of eliciting yawns for nap time afterwards. After all, isn’t that when dreams may come?