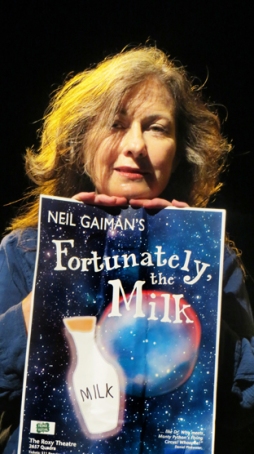 Anyone familiar with Neil Gaiman‘s Fortunately, the Milk will find Windwhistle Theatre’s adaptation for the Fringe festival circuit captivating. Marion Jeffery is excellent giving life to the spoken word, and she commands the stage. When considering her background includes working at Birmingham Children’s Theatre in Birmingham, Alabama, and performing at The Kennedy Center, no one should be surprised. Both adults and children will be enthralled in how vividly well she can recall the text.

There’s no need to review the story; it’s been done many times since its 2013 publication. This author can do no wrong and when he begins setting ideas to page, what gets written is pure gold. In summary, the story details the wild and loony adventure dad went on after he bought a bottle of milk to satisfy his two daughters and his own need. When the store is simply ’round the corner and he arrived home late, they demanded an explanation. The story he gave is almost like Hitchhiker’s Guide to the Galaxy, complete with a red button to not panic with, and the reader is left to decide if his adventure did indeed happen. When what this father experienced included a time travelling journey with zany Indiana Jones style moments which included encounters with intelligent dinosaurs, hungry vampires (wumpires) and bizarre piles of goo, maybe it’s time to read the book to process the material in a slow and steady pace. That way, the illustrative content can be enjoyed when the stage show had none.

In this very minimalist show, the storyteller had to detail everything. Jeffery’s gestures are easy to interpret but to see her hold a plastic milk bottle prop just like when Gaiman promoted his book can make all the difference so all the human senses are engaged. She never rushes through the material, but not everyone can keep up with the faster moments. Even a backdrop slide show of where the action takes place — inside a UFO or at the mouth of a volcano — when the action becomes more manic might shave off bits of exposition so more emphasis can be placed on the dialogue. The switching of the stage lights to different colours helps but it did not feel like enough to complete the illusion.

The hope for Windwhistle Theatre is to take this production to other venues. With Gaiman’s name attached, many fans of this author will notice. The show will work in its current state when not many K12 schools have a dedicated theatre department. In other places that has more equipment to offer, this show can definitely be amped up to make it stand out on stage. After all, fresh milk can be processed skimmed or whole for consuming.

4 Bottles of Milk out of 5
Originally published on Otakunoculture.com by Ed Sum